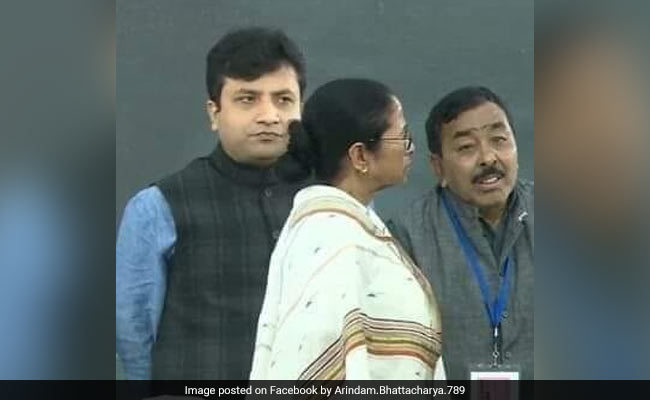 Mamata Banerjee's Trinamool Congress continues to lose its leaders to the BJP as the Bengal election draws closer. Today, party MLA Arindam Bhattacharya crossed over to the BJP in Delhi.

The MLA from Shantipur is the Trinamool's first exit from Nadia district.

Mr Bhattacharya had won the 2016 Assembly election from Shantipur on a Congress ticket. In 2017, he suddenly switched to the Trinamool Congress. He, however, never resigned as an MLA or sought re-election. He was a vice president of the Trinamool's Nadia district unit, which was headed by MP Mahua Moitra.

According to sources, Arindam Bhattacharya decided to quit Trinamool after he reportedly learnt that the party would replace him as candidate for Shantipur in the upcoming polls. He would be given a ticket from elsewhere and his rival Ajay Dey would be getting the seat.

After Mr Bhattacharya joined the BJP in Delhi, local sources at Shantipur reported that a section of the party that does not like him has threatened to resign en masse in protest.

The Trinamool, facing its most challenging election in Bengal since coming to power in 2011, has lost more than 40 leaders and lawmakers to the BJP over the past few months.

The biggest loss has been Suvendu Adhikari, who used to be Mamata Banerjee's top lieutenant until his defection last month at a rally addressed by Union Home Minister Amit Shah.

Mr Adhikari has rapidly become the Chief Minister's worst nightmare in her bid for a third term in Bengal.

He has drawn several more Trinamool dissidents to the BJP.

Officially, Mamata Banerjee has maintained that those wishing to quit the party are free to do so. But only recently, the party managed one save as prominent movie star-turned-politician Shatabdi Roy, on the verge of announcing her exit, changed her mind after being offered a key post.

Another MP, Prasun Banerjee, also went down the same route. After he expressed dissatisfaction with the party, Mr Banerjee was escorted to meet Abhishek Bnaerjee, the Trinamool MP and Mamata Banerjee's nephew, who has become a power centre in the party, second only to the chief minister. After the meeting, Prasun Banerjee said his issues with the party had been resolved and he was firmly with it.

Kareena Kapoor Khan Shows Us How To Do Maternity Fashion Right