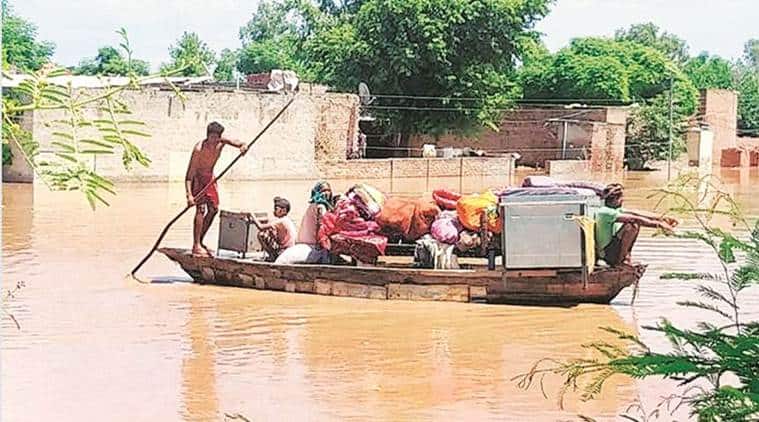 The flood situation in Punjab remained grim on Monday with Sutlej breaching Dhussi Bands at several spots and flooding villages in Doaba and Malwa region of the state. Many breaches were reported to be 50 to 70 feet wide.
As CM Amarinder Singh termed the deluge “unprecedented”, the Punjab government declared the flood situation a natural calamity. The CM also announced Rs 100 crore for emergency relief and rehabilitation measures. He also ordered special ‘girdawari’ (crop loss assessment) as soon as the water level recedes.

With water flooding IIT-Ropar, Amarinder directed the administration to ensure that the students were put up at Punjab Bhawan and Kisan Bhawan in Chandigarh. The CM also toured Ropar and met people whose properties had been damaged due to the flooding and expressed grief over the death of three persons due to roof collapse in Ludhiana district.

The flooding was triggered by release of more than 2.40 lakh cusecs water in the Sutlej from Ropar Headworks Sunday. With its reservoir continuing to hold more water than its capacity (1,680 feet) as a result of heavy rainfall, Bhakra dam on Monday released another 1 lakh cusecs downstream. Though it did not rain Monday, IMD has predicted heavy rain in the catchment area of the river in the coming days.

The Bhakra Beas Management Board (BBMB) also called a meeting of three states — Punjab, Haryana and Rajasthan — Tuesday to discuss the situation if the inflow into the reservoir continues unabated.

“The states need to be prepared if it rains and inflow becomes heavier. Though we can store water up to 1685 feet, against the permissible limit of 1680 feet, it would exert high pressure on the dam. The safer bet is to release the excess water,” a BBMB official said. Meanwhile, the CM has asked to the Drainage Department to plug the breaches on war-footing, with the help from the Army if needed.

During a meeting to review flood preparedness in the state, it was also decided at the meeting that the CM’s Secretariat as well as Chief Secretary would maintain close liaison with the office of the Army Commander, Western Command, Chandimandir, and pro-actively apprise them of the nature and quantum of Army assistance required. The respective DCs will make the formal request at their level, as and when the situation so warrants.

On Monday, Army, NDRF and State Disaster Relief teams conducted rescue operations in Phillaur and saved more than 80 lives. In Ropar, nearly 700 who were left stranded in flood waters were rescued Monday.