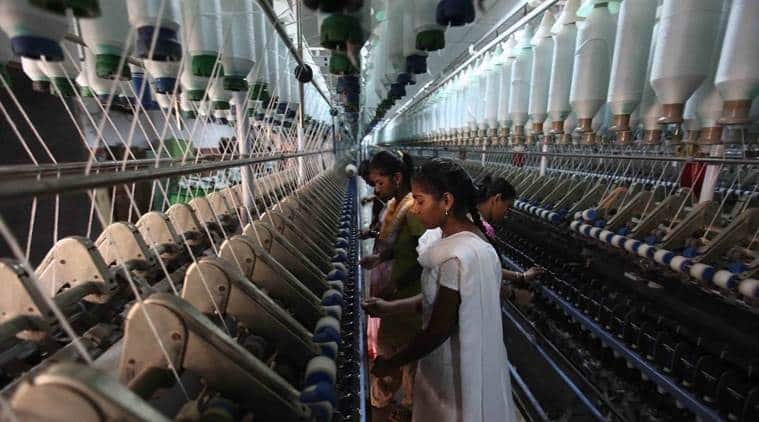 In Surat, there are around 6 lakh powerloom machines, 360 dyeing and printing houses, and 65,000 textile trading shops. (Representational Photo)

The Surat textile industry, which relies a lot on migrant workforce, has requested the state government to set up a committee to convince the labourers not to return to their home state. They also requested the government to waive their electricity bills for six months starting from the lockdown.

At least 60 per cent of the workforce is estimated to have left Surat since the Shramik Special trains started. According to Surat railway officials, over 6.80 lakh labourers have left Surat in 431 trains.

The textile industry leaders made a representation to the District Collector of Surat, Dhaval Patel, to make arrangements so that the migrants who are still in the city do not leave Surat, and return to the factories and work.

In Surat, there are around 6 lakh powerloom machines, 360 dyeing and printing houses, and 65,000 textile trading shops.

Pandesara Weavers’ Association president Ashish Gujarati said, “There are around 15 lakh labourers associated with the textile industry. Out of them, over 60 per cent have left Surat. Only 10 per cent of powerloom factories are running with 10 to 20 per cent staff. The factories are running only during the day time. We have requested the district collector to make arrangements so that the labourers who are still here can be convinced to come back to work. Even the police should not stop the workers from reaching the factories.”

The Federation of Indian Art Silk Weavers’ Association has also sent a memorandum to Chief Minister Vijay Rupani and state energy minister Saurabh Patel requesting them to waive the electricity charges for six months starting from the lockdown period.

The association chairman Bharat Gandhi said, “The electricity cost is a huge burden on the industry running with lower capacity. Majority of the powerloom factory owners are from middle class and they have to pay loan installments to banks for their machineries and other day to day expenses. With the lockdown still on, these industry players are facing financial crunch. So if such relaxations in power bills are given, it will help the industry.”