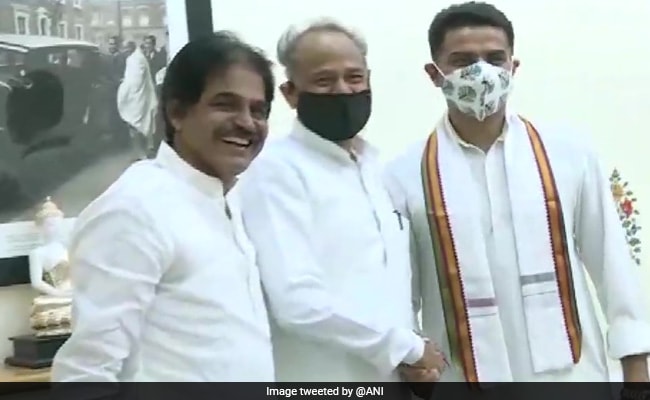 Sachin Pilot was greeted with a handshake by Ashok Gehlot at a meeting of Congress MLA at the Rajasthan Chief Minister's home, his first after his reconciliation with the party leadership and "homecoming" after a month-long revolt. The Chief Minister had posted on Twitter this morning that he was all for "forget and forgive" and moving on.

The two leaders were seen shaking hands and sitting together at the meeting, betraying nothing of the month-long acrimony following Sachin Pilot's revolt, which had pushed Mr Gehlot's government to the brink.

The meeting to plan for the special session of the Rajasthan assembly from tomorrow has assumed even more significance after the opposition BJP announced that it will move a no-confidence motion.

Mr Gehlot has been guarding 100-odd MLAs at hotels since Sachin Pilot launched his revolt. Mr Pilot and 18 rebels returned to Jaipur on Tuesday after ending a month-long rebellion. The truce was announced on Monday after Mr Pilot met with Congress leaders Rahul Gandhi and Priyanka Gandhi Vadra, who reassured him that his grievances would be addressed.

Mr Gehlot indicated in his tweets that despite his reluctance, he was ready to fall in with the wishes of Sonia Gandhi and Rahul Gandhi, who had been keen on retaining Mr Pilot even when his rift with the party appeared to have reached breaking point.

"The Congress's fight is to save democracy under the leadership of Sonia Gandhi and Rahul Gandhi. In the past one month, whatever internal discord happened within the Congress party, we have to, for the state, for the country and for the people for Rajasthan, move on with the spirit of forget-and-forgive," Mr Gehlot tweeted in Hindi.

In practice, it will be harder to do for the Chief Minister, who aimed unfiltered attacks on Mr Pilot over the past month. In his most controversial remarks, Mr Gehlot called his former deputy "nikamma, naakara (useless)", corrupt and "all about good looks and smooth-talking".

Mr Gehlot also said he had not spoken to Mr Pilot in the last 18 months.

To help smooth things over, the Congress has despatched senior leader KC Venugopal, who is also at the meeting.

On Tuesday, Mr Gehlot left Jaipur before Mr Pilot arrived and chose to fly to Jaisalmer, where he had put up MLAs ahead of a test of strength on Friday.

Mr Gehlot said Congress MLAs are "naturally upset" about the truce but everyone had to accept it in the interest of democracy. The MLAs on Team Gehlot returned to Jaipur on Wednesday and were driven straight to Fairmont, the resort they had stayed in during the rebel crisis.

The Congress has 107 members in the 200-member assembly where the majority mark is 101. With the support of independents and smaller parties, it has 125.

The BJP has 72 MLAs and three allies.