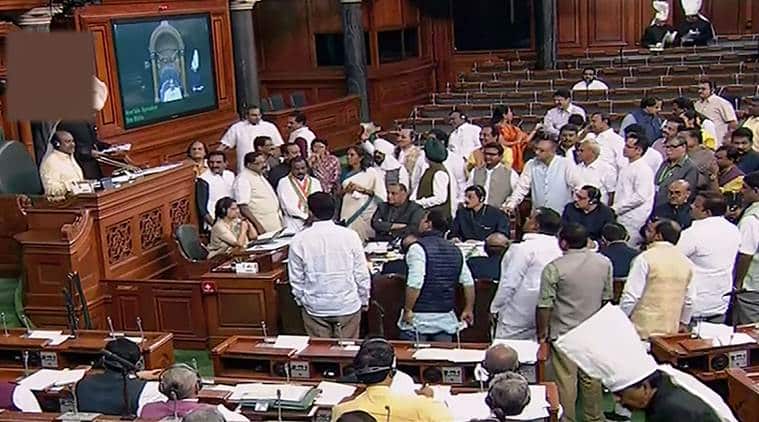 THE GOVERNMENT on Tuesday reached out to main opposition Congress soon after Rajya Sabha Chairman M Venkaiah Naidu adjourned the House in the morning after disallowing notices given by some Opposition members to suspend all business and discuss issues such as the JNU students’ protest and the situation in Jammu and Kashmir.

Soon after the House was adjourned till 2 pm, senior Opposition leaders including Leader of Opposition Ghulam Nabi Azad, Sharad Pawar, Anand Sharma, Sukhendu Sekhar Roy, Tiruchi Siva and Sanjay Singh met Naidu and conveyed their anguish over the adjournment without Opposition members getting a chance to raise issues of concern to them.

Sources said the leaders argued that the Opposition should be given an opportunity to raise issues of national concern and recalled that the government had assured them it was willing to discuss all issues. While CPI’s Binoy Viswam and CPM’s K K Ragesh had given notices under Rule 267 to discuss the JNU issue, CPM’s Elamaran Kareem wanted the House to discuss the situation in Kashmir.

“Not a single MP from Opposition went into the Well of the Rajya Sabha. Yet, House was adjourned within minutes right till 2 pm. Oppn deprived of raising imp issues in Zero Hour & holding ministers accountable in Question Hour. #Parliament When you don’t have answers, u run away,” tweeted TMC’s Derek O’Brien.

“At least, the Chair should have given us a minute or two or told us to raise our issues in one or two sentences… The Chair could have also told us that the issue can be discussed during Zero Hour and given us time,” Viswam told The Indian Express.

Meanwhile, the Lok Sabha saw noisy scenes as Opposition members protested on issues like removal of SPG cover of the Gandhi family and the JNU protest.

Raising the SPG issue during Zero Hour, Congress leader Adhir Ranjan Chowdhury said, “There is a threat to the lives of our leaders.” Chowdhury, who had given a notice on the issue, said that the Gandhi family was given SPG security from 1991 to 2019, and two earlier NDA governments had not removed it. Later, the Congress members staged a walkout.

Raising the issue of police action on protesting JNU students, BSP’s Danish Ali demanded an inquiry into the incident and an apology from the government.

With inputs from Harikishan Sharma