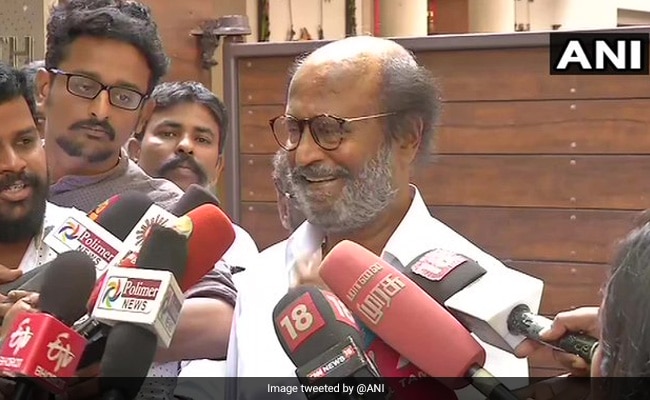 Rajinikanth rejected demands from the Dravidar Viduthulai Kazhagam (DVK) for his apology.

Superstar Rajinikanth today said he would not apologise for his comments on social reformer EV Ramasamy "Periyar", over which a police complaint has been filed by a political group. Accused of "defaming" Periyar in the complaint, Rajinikanth said his comments were based on news reports he had read.

Addressing the 50th anniversary event of Tamil magazine ''Thuglak'' on January 14, Rajinikanth had said: "In 1971, at Salem, Periyar took out a rally against superstition in which naked images of Lord Ramachandramoorthy and Sita - with a garland of sandals - were displayed and no news outlet published it."

The veteran actor was making a point that only Cho Ramaswamy, the founder editor of "Thuglak", published it and criticized it. The news rattled the DMK government headed by M Karunanidhi at the time, he said, adding that the state administration seized copies of the magazine but Cho Ramaswamy

reprinted it and the copies sold "like hot cakes in black".

Rajinikanth, whose political debut has been anticipated for some time and is expected before the Tamil Nadu election next year, rejected demands from the Dravidar Viduthulai Kazhagam (DVK) for his apology.

"I will not ask for an apology for the comments on Periyar. I spoke based on news reports I read. They speak on the basis of what they saw. This is an incident to be forgotten, not to be denied," said the 69-year-old actor.

Two complaints have been filed by the Dravidar Kazhagam founded by Periyar, citing charges of promoting enmity and inciting hate.

The DVK has also threatened protests outside theatres showing the actor's latest movie 'Darbar' if he does not apologise.