Leelavati with railway officials in Mumbai.

A 68- year-old woman, allegedly abandoned and driven out of home by her son in Mumbai Saturday, and then spotted by railway officials outside a station, will now be put on a Rajdhani Express to Delhi to her younger son in the evening.

At a time when movie stars are hitting headlines for sponsoring migrants to go back home, a few railway officials have quietly rescued this senior citizen, and are now arranging her safe passage.

Leelavati Keshav Nath, a resident of Delhi, was found sitting alone on the pavement outside the Bandra Terminus railway station amid the lockdown.

When concerned railway officials asked her, she told them she had been “thrown out” out of the house by her elder son. Leelavati – – frail and barely able to speak — told officials that she had come to Mumbai four months ago to nurse the son back to health.

“I got stuck here when everything shut down a few months ago. My son had called me here because he was sick and needed nursing. But when he became alright, he started to ask me to leave. He beat me and threw my things out of the house. He said go wherever you want,” a sobbing Leelavati told The Indian Express over phone. She said her husband passed away in December last year after which she had been facing such issues at home. “Where will I go except to my own children?” 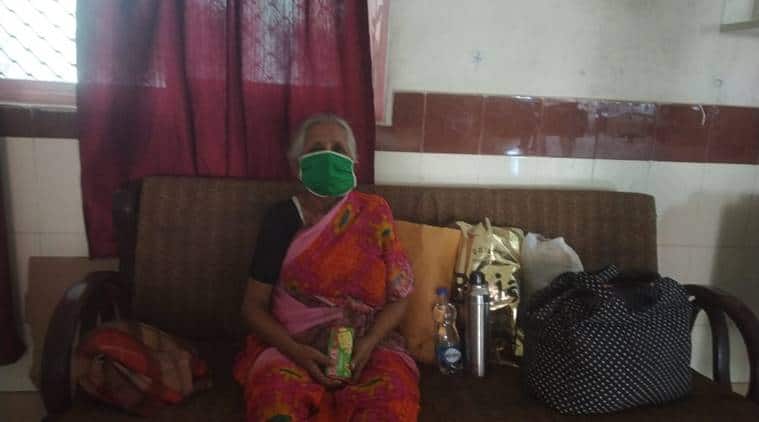 Leelavati, who came to take care of her elder son, was driven out by her son after he recovered from his illness.

Led by Senior Divisional Operations Manager Suhani Mishra, the team in Mumbai Central found out where her other son lived in Delhi. Then it was decided to arrange for her safe passage back home.

“We gave her food, took down her details. She said she slept well in the waiting room. The station is empty thanks to no operations these days. Now we are waiting for our car to come and take her to Mumbai Central station from where she will take the train,” said Sagar Kulkarni, Station Superintendent of Bandra Terminus.

Officers in Mumbai booked her a confirmed AC-II tier ticket. They will arrange for her food on board and will see to it that she reaches home safely, they said.

The train will reach Delhi on Monday. Officials are arranging for a car in Delhi division to take her home. Her younger son, who Leelavati said worked in a hardware store, lives in East Delhi’s Pandav Nagar area. She said she has five children and grandchildren.

“What else is there for me to do? I have got all my children married. They have their own children now. What more do I need to do?” she asked.

Railway officials, including Railway Protection Force officials, as a humanitarian gesture, will accompany Leelavati to her home to see to it that she is accepted and taken care of.