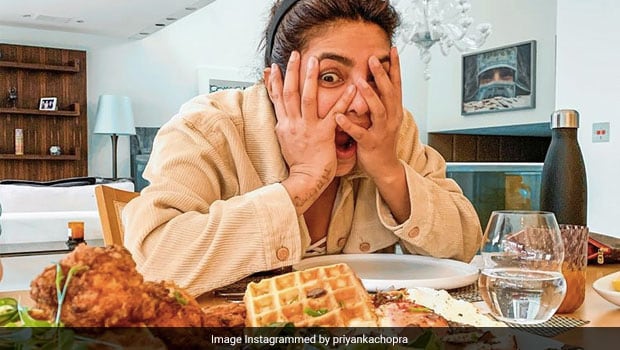 The Indian fans of Priyanka Chopra are thrilled as they'll finally get to their favourite 'Desi Girl' in the adaptation of 'White Tiger' with Rajkummar Rao. Priyanka Chopra will also be seen in 'We Can Be Heroes' and international project that is being touted as one of the biggest kids' movie to watch out for. It cannot be argued that Priyanka Chopra is one of the hard-working celebs we know of, so if she wants to indulge every once in a while- it is completely understood, right?

Priyanka Chopra, who is in London, gave us a glimpse of her scrumptious Sunday brunch. Priyanka sported a hilarious expression in the picture she shared on Instagram on Sunday. "What do I do with this!??", she wrote in the caption. If we were in your place Priyanka, we would polish it in minutes.

The brunch was prepared by chef Zoe Wagger, and he shared the details of the brunch in his profile. "An epic brunch situation going on here, T-bone steak + waffles made with tallegio + tarragon // fried eggs in the meat juices w shaved truffle // KFC (Korean fried chicken) + sweet waffles, pickled onions, chilli + maple", he wrote in his caption. Yes, we are drooling as well.

Priyanka Chopra is a self-confessed foodie; remember the time she defeated TV show presenter Jimmy Fallon in a 'Hot Wings' eating competition, on his own show! Isn't she #goals?!