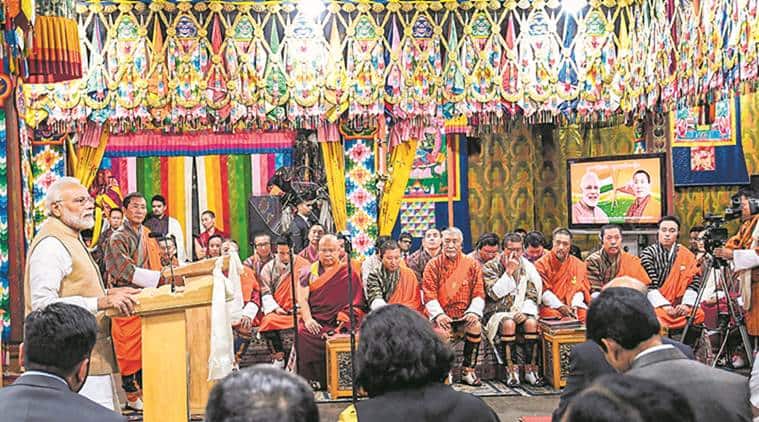 On his first visit to Bhutan in his second term, Prime Minister Narendra Modi met Bhutan’s Prime Minister Lotay Tshering on Saturday, and promised that India’s support for Bhutan’s five-year plans would continue in the future, based on Thimphu’s priorities.

After the talks, Modi said, “India is fortunate to be one of the key partners of Bhutan. India’s support for Bhutan’s five-year plans will continue in the future as based on your wishes and priorities.”

Modi, who is on his second visit to Bhutan, and the first since his re-election in May this year, inaugurated the 740 MW Mangdechhu hydroelectric power plant, and launched stamps to commemorate five decades of India-Bhutan hydropower cooperation.

“Hydropower is an important area of cooperation between our two countries. Together, the two countries have transformed the power of the rivers of Bhutan into not only electricity but also mutual prosperity. Today we have achieved another historic milestone of this journey with the inauguration of the Mangdechhu project,” Modi said.

“With the cooperation of both countries, hydro-power generation capacity in Bhutan has crossed 2000 MW. I am confident that we will also take other projects forward very fast,” he added.

The Mangdechhu project is funded by India through a 70 per cent loan and a 30 per cent grant. It is expected to generate 2,923 GWh of electricity.

The two countries signed 10 Memorandums of Understanding in the fields of space research, aviation, IT, power and education.

Modi also launched the RuPay Card in Bhutan by making a purchase at Simtokha Dzong, built in 1629 by Shabdrung Namgyal. One of the oldest dzongs in Bhutan, it functions as a monastic and administrative centre.

“I am very happy that today we have launched RuPay card in Bhutan. This will further enhance our relationship in digital payments, and trade and tourism. Our shared spiritual heritage and strong people-to-people relationship are key of our relations,” he said.

On increasing the currency swap limit for Bhutan under the SAARC currency swap framework, Modi said India’s approach is “positive”. He said an additional USD 100 million will be available to Bhutan under a standby swap arrangement to meet the foreign exchange requirement.

The two leaders also unveiled an e-plaque of the interconnection between India’s National Knowledge Network and Bhutan’s Druk Research and Education Network. full report on www.indianexpress.com