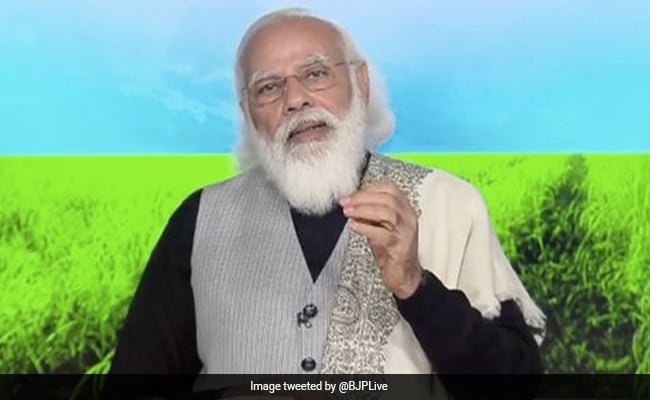 Prime Minister Narendra Modi today released Rs 18,000 crore to over nine crore farmer families under the Pradhan Mantri Kisan Samman Nidhi (PM-KISAN) programme. With the push of a button, PM Modi enabled the transfer of money at an event that the ruling BJP has made into a big exercise amid the protest by farmers against three new farm laws.

"Some people are spreading myth and lies that land will be taken away if farmers enter into contract farming," PM Modi said, alluding to the opposition's attack that farmers won't benefit from the three new farm laws, adding the centre is ready to hold another round of talks with farmers.

The PM-KISAN programme provides Rs 6,000 per year to small and marginal farmers, payable in three instalments of Rs 2,000 each. It is transferred directly to the bank accounts of farmers.

In a video conference, PM Modi spoke to some farmers selected for the event from several states, who narrated the problems they faced and the innovations they made with the help of government grants.

The event by PM Modi is being seen as an effort to blunt the farmer protests by highlighting the benefits of agricultural reforms and bringing out stories of success from villages across India.

"Farm reforms became necessary because poor farmers, who comprise over 80 per cent of farmers, were getting poorer under past governments," PM Modi said.

The Prime Minister said the centre is ready for another round of discussions with the protesting farmers. "Due to our commitment towards farmers, we are ready for discussions on all their issues with an open mind at any time. Some political parties supported these laws in the past. Our government is ready to talk to those opposing us as long as the discussion is based on facts," he said.

Thousands of farmers have dug in on the highways in the Delhi-Haryana border in protest against the farm laws. They say they fear that minimum support price (MSP) would be removed as the next logical step of the farm laws. The government, however, says the farm laws remove middlemen and are in fact beneficial for the farmers, and MSP would remain. Another round of talks between farmer leaders and the government is awaited.

Babil's Response To Those Who Ask "Are You A Girl?" For Wearing Makeup

Kareena Kapoor Khan Shows Us How To Do Maternity Fashion Right