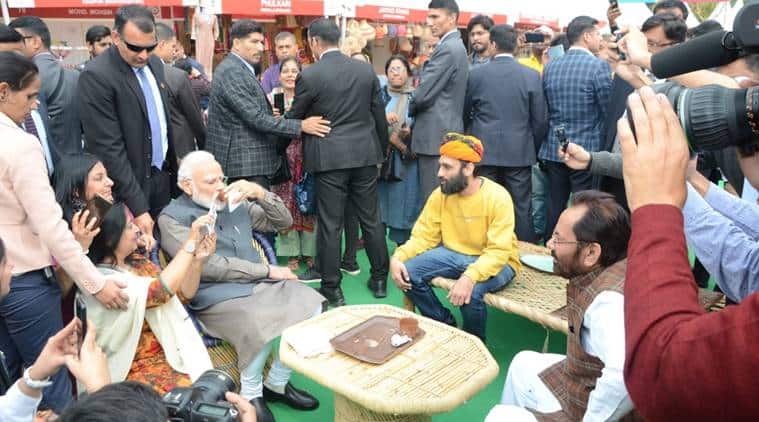 Prime Minister Narendra Modi took everyone, including minority affairs minister Mukhtar Abbas Naqvi, by surprise when he walked into the Hunar Haat at the India Gate lawns, soon after chairing a cabinet meeting on Wednesday.

The prime minister spent close to an hour interacting with artisans from minority communities across the country, had a cup of kulhad chai, relished some litti chokha and gave the weekday crowd some photo opportunities. Officials said the visit was unplanned.

Naqvi, who had just returned home after the cabinet meet, was informed by his staff at Hunar Haat that the the prime minister might be on his way as a few SPG personnel have arrived.

“I was about to have my lunch, I dashed out, disbelieving since if there was a plan it was normal for him to mention it to me at the cabinet. But I was still not willing to take a chance. I was doubtful though that if this was indeed true, I would not reach on time to receive him because VIP traffic restrictions would be in place. There was none so I managed to reach the lawns on time, by then confident PM won’t be coming as the traffic was normal. Imagine my surprise when I was told that the PM’s car is stuck at the Rajpath red light,” an ecstatic Naqvi recounted.

Officials said traffic restrictions were not imposed as “this was a sudden visit and the PM did not want people to be inconvenienced”.

Modi, who reached around 1.35 pm, spent a leisurely 55 minutes at the fair. He inspected the wares, listened to the artisans’ stories and enquired about their family members.

“He interacted with several of the traders. One woman, Mehzabeen who is physically challenged broke down recounting how after her husband left her it was Hunar Haat that had helped her sustain her family. She said she is now not only educating her child but had also bought a home,” Naqvi said. After some time he walked into a tea stall and had a cup of kulhad chai for Rs 20. According to sources who were present at the time, PM Modi paid from his own pocket and even asked the stall owner to return the change. After some time he bought a plate of litti chokha, settled on one of the charpoys and finished the dish, all the time with Naqvi for company.

Sharing pictures from his visit on Twitter, PM Modi said he spent a “wonderful afternoon” at Hunar Haat. Urging residents to visit the exhibition, PM Modi also said that “colours and diversity of India on display” at Hunar Haat. “It showcases the best of products including handicrafts, carpets, textiles and of course, delicious food! The participation of people from all across India makes #HunarHaat a vibrant place.”

PM Modi also shared videos of his interaction with artists at the exhibition. In another video, the prime minister can be seen trying his hand at some music.

The Hunar Haat is a government initiative to showcase wares of minority artisans from across the country. It has been on for some years now at various locations in the country. This year, the exhibition is based on the theme of ‘Kaushal Ko Kaam’ and will be held till February 23 at the India Gate in New Delhi. Similar ‘haats’ are being organised across India as part of an effort to empower master artisans.

Umar Akmal not to challenge PCB's show cause notice

Shaktimaan set to make a comeback on Doordarshan