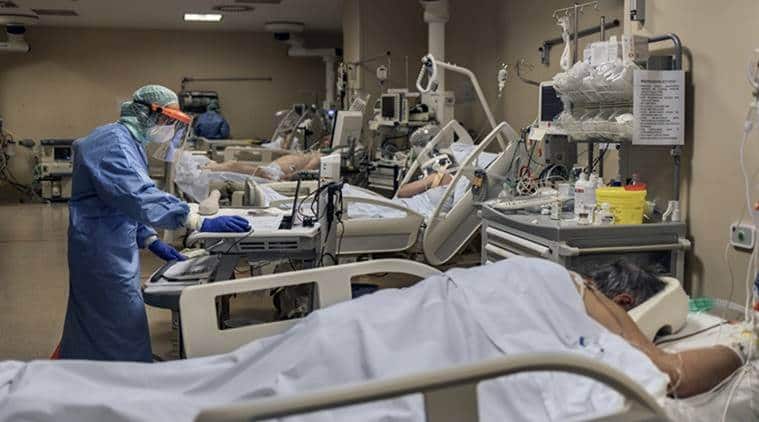 Within hours of his cremation, his family received a call stating that he was doing well and that his condition was stable. (File Photo)

The family of a 71-year-old suspected Covid-19 patient, who was declared dead at the Gujarat Cancer and research Institute (GCRI) on the Civil Hospital campus in Asarwa and was cremated the same day, was taken over by confusion and anxiety after calls from the hospital later saying that his condition was “stable”.

Devrambhai Mahangurao Bhisikar, a resident of Viratnagar, was declared dead on May 29 at GCRI. Within hours of his cremation, his family received a call stating that he was doing well and that his condition was stable. Another call from the command and control centre operating from the Civil Hospital campus informed them the same the next day.

“On May 29, afternoon, we received a call from GCRI that he was dead and we reached the hospital immediately. When I reached there along with my elder sister-in-law, we were shown a body that was packed as per Covid protocol as he was a suspected case and his report was pending. We did not see his face. The bag of clothes and other things I handed over to him at the time of admission was also with him, so I believed that he was my father-in-law,” said Nilesh Nikte (40), Devrambhai’s son-in-law who lives in Noblenagar.

Devrambhai was rushed to Civil Hospital Ahmedabad on May 28 afternoon when he had cought and his sugar levels shot up. After chest X-ray, he was sent to Covid ward. By evening, he was transferred to GCRI.

Nikte and Devrambhai’s nephew cremated the body at the Vadaj cremation ground on May 29 night. Devrambhai is survived by three daughters, of whom two are married.

After cremation, they reached home around 11 pm and his daughter received a call around 1.30 am (May 30) from the call centre. “My wife did not answer the call as it was an unknown number and it was too late. We again received a call from the call centre on May 30 morning, informing us that my father-in-law’s Covid test report was negative and that he was shifted to the non-Covid ward,” said Nikte.

The call made the family members rush to GCRI. “We were taken to the director who told us that it was indeed my father-in-law who died and some error had happened at the call centre. We returned home… But after we reached home, we again received a call around 2.30 pm from the call centre that my father-in-law’s condition was stable,” Nikte said.

As per a press release quoting GCRI director Dr Shashank Pandya, the control room personnel informed the family of the death and pending cremation. Once the Covid report came negative, the relatives were informed of the same, it said. “Devaram’s report is negative so he has to be transferred,” the personnel purportedly told the relative. As per the official statement, the personnel informed the family “without adequate investigation as the person on duty in the control room did not know of the patient’s last updated conditions”. “There is no irresponsibility or carelessness in this whole thing except that the employee on duty in the control room informed the result of the Covid-19 report… without knowing the last health status…”