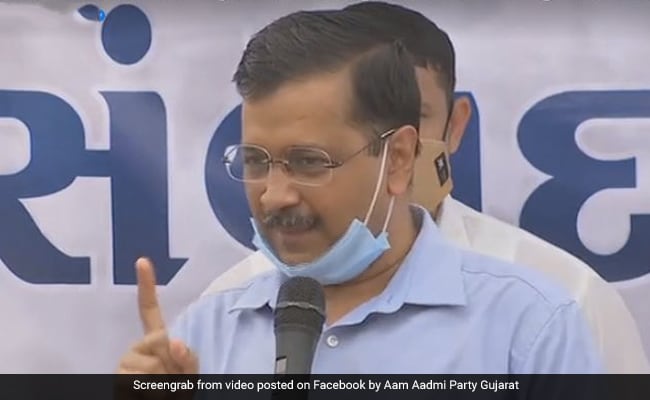 Arvind Kejriwal is in Gujarat's Surat today for a thanksgiving roadshow after his Aam Aadmi Party (AAP) scored seats in civic body polls in its debut, denting the Congress.

The ruling BJP swept the polls held on Sunday across six municipal corporations in Gujarat, winning 483 out of 576 seats.

In Surat, the BJP retained power by winning 93 of 120 seats, but the remaining seats were won by AAP. The Congress, which had won 36 seats in the Surat civic body the last time, was reduced to zero seats and replaced by Arvind Kejriwal's party as the main opposition.

"If we are 27, they are 93. Numbers don't matter. Every man in our party is enough for 10 rivals. People of Surat have given you the role of opposition. Don't let them (rivals) do anything wrong," Mr Kejriwal told supporters today.

In a pep talk to the newly elected corporators before his roadshow, the Delhi Chief Minister urged them to open offices, give their phone number to people and be ready to help even at 2 AM if needed.

"The public can tolerate everything but they cannot take not insult or arrogance. We must never humiliate anyone who comes to us," he warned.

AAP, contesting the Gujarat civic polls for the first time, had fielded 470 candidates.

The party apparently received support from the Patidar Anamat Andolan Samiti (PAAS), the organization agitating for quota for the powerful Patel community. The organization was once led by Hardik Patel, who is now the working president of Gujarat Congress.

Riding on the anti-BJP wave created by the quota agitation in 2015, Congress managed to win 36 seats in the Patidar-dominated areas of Surat in the previous civic polls.

In the 2017 Gujarat election, AAP had failed to win any seat despite Arvind Kejriwal's campaign.

Gopal Italia, AAP's Gujarat chief, said his party would now present itself as a new alternative in Gujarat and the beginning would be made from Surat.

Mr Kejriwal, referring to the Surat success, said on Thursday that AAP was the only party that was challenging the BJP in the country.

"The Congress is being wiped off from everywhere, you must have heard about the municipal election results in Surat. Congress got zero seats in Surat. The Aam Aadmi Party is the only party to challenge the BJP across the nation," he said, campaigning for civic by-polls in Delhi.