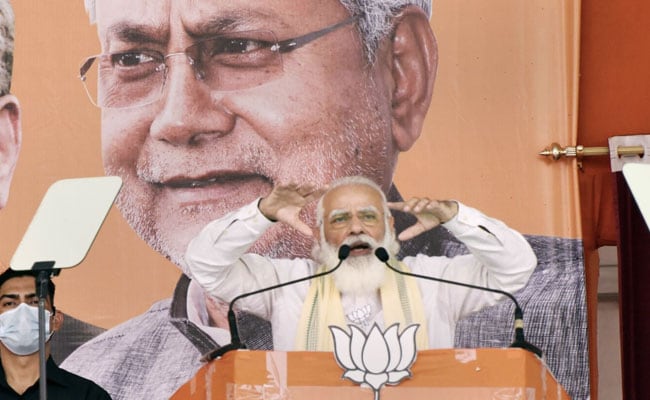 Prime Minister Narendra Modi, addressing his first rally in Bihar today for the election starting next week, referred to criticism of his government's move to end special status to Jammu and Kashmir under Article 370 and targeted the opposition.

"Everyone was waiting for Article 370 to be repealed but these people are saying that they will overturn the decision once they are voted to power," PM Modi said in Sasaram, addressing a joint rally with Bihar Chief Minister Nitish Kumar.

"The NDA government abrogated Article 370. These people say they will bring it back if they come to power. After making such statements they dare to ask for votes from Bihar? Is this not an insult of Bihar? The state which sends its sons and daughters to the borders to protect the country?"

Nitish Kumar, significantly, was initially opposed to the Article 370 move and his Janata Dal United MPs had even opposed the central government's decision in both houses of parliament last year. Nitish Kumar's move as a BJP ally had surprised many even though it tied in with his stated ideological stand on Article 370.

Within days, however, Nitish Kumar and his party came around and fell in with the centre's decision. JDU leaders said it had opposed the move as it had not been consulted, but since it had become law, the party would support it. "The special status of Kashmir is now over and Article 370 is behind us," JDU leader RCP Singh said in August last year.

In the campaign for Bihar, Article 370 has come up more than once.

Earlier this week, Uttar Pradesh Chief Minister Yogi Adityanath - one of the BJP's campaigners in Bihar - said the abrogation of Article 370 had given people of other states the chance to own property in Jammu and Kashmir. He said this at rallies in Jamui, Tarari and Paliganj.

"Earlier, a person from this part of Bihar could not even think of owning property in Kashmir. The Congress had put such a system in place. But Narendra Modi and Amit Shah changed all that. Article 370 has been scrapped and the people now can buy and own property in any part of Kashmir," he said.

17 Arrested Over Posters Against PM Modi In Delhi: Sources

Lockdown In Bengal For 2 Weeks From Tomorrow, Essential Services Allowed

Are ‘tulip turbines’ the answer to energy eyesores?