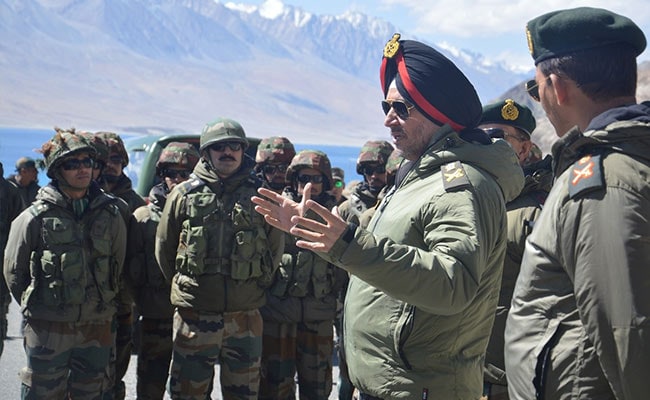 Days after a brief stand-off between Indian and Chinese soldiers in eastern Ladakh, Lt Gen Ranbir Singh, the General Officer Commanding-in-Chief of the Northern Army Command, visited the region on Monday and interacted with the troops.

Lt Gen Singh was seen on board an interceptor boat used in the region and addressing a gathering of soldiers.

This visit is likely to send a clear message to the Chinese military about India's commitment to defend its boundaries.

"He was briefed on the operational situation and readiness being maintained in the sector," a statement from the army said.

"Lt Gen Ranbir Singh interacted with the troops deployed at the forward locations and complimented them for their tenacity and dedication to duty in extreme terrain and in conditions of adversity. He urged them to continue to uphold the highest standards of professionalism of the Indian Army," it added. 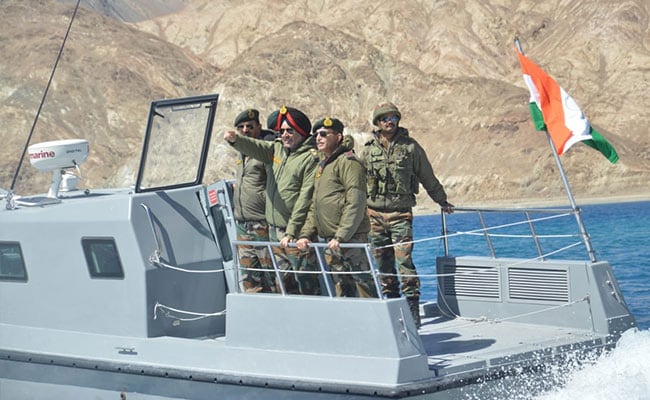 Lt Gen Ranbir Singh on board an interceptor boat in Ladakh.

The day-long standoff on Wednesday between Indian and Chinese soldiers was resolved through delegation-level talks, army sources said.

Indian soldiers were patrolling at the northern bank of Pangong lake on Wednesday morning when they were stopped by Chinese soldiers, according to a report in The Times of India. Two-thirds of the lake in the high-altitude region that extends from Tibet to Ladakh is controlled by China.

Soon, the standoff between the two sides started, with both calling in reinforcements and it continued till the evening, the newspaper reported.

The matter has been de-escalated and disengaged fully after delegation-level talks yesterday. This occurs due to differing perceptions of LAC (Line of Actual Control). There are established mechanisms to resolve such occurrences," an army source said.

This is not the first time that a standoff has been reported between Indian and Chinese soldiers around Ladakh's Pangong lake, a site that also draws a lot of tourists.

In August 2017, a video of a standoff between soldiers of the two sides was widely circulated on social media, showing many soldiers from the two countries punching and kicking each other and throwing stones. The incident took place on Independence Day when Chinese troops tried to enter Indian terrain along the banks of Pangong lake, but were stopped by Indian soldiers.

To guard its side of Pangong lake, Indian forces are armed with high-speed interceptor boats, bought from the US, which can accommodate nearly 15 soldiers and are equipped with radars, infrared sensors and Global Positioning System. These boats are used to conduct reconnaissance and area domination patrols.