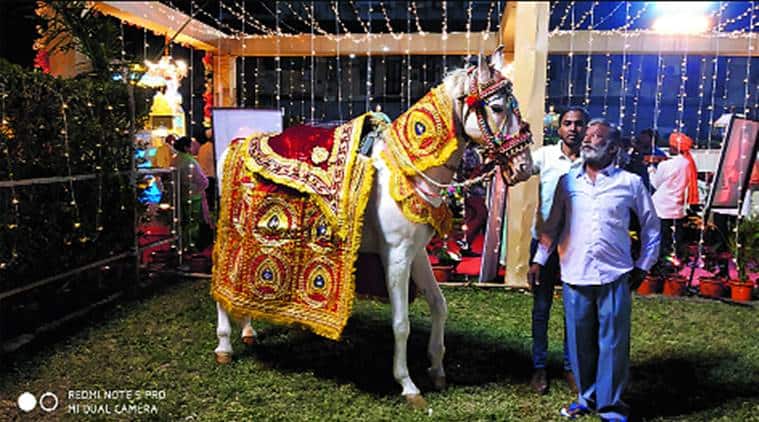 Ilyas Pathan, 42, from Ratanpur village in Kheda, owns four horses that are used for wedding ceremonies. The animals earned him Rs 3 lakh in March and April, 2019. This year, with the Covid-19 pandemic and the ongoing lockdown, his income has so far been nil.

Pathan, who had inherited a small farm land from his father, switched to domesticating horses to earn for his family of six after the small piece of land turned non-cultivable due to lack of irrigation facilities. With no business, price hike of feed and uncertainty over the situation, Pathan now struggles to maintain his horses.

“Since March, there were no bookings for wedding. Around 20 of them cancelled their bookings with the spread of the virus and then the lockdown began,” Pathan said.

“I had hired 12 men for this season to accompany the horses at various venues and had to pay them Rs 300 a day. Since I had hired them for an entire season I am bound to pay them irrespective of no business. This is in addition to taking care of the horses that require a minimum expenditure of Rs 400-500 per day,” he added. Most of the weddings have either been postponed or have been conducted with minimal attendance and ceremonies, reducing the need for horses.

In Umarapada village of Surat, Bharat Patel (53) has been forced to cut down on food for his horses, with the cancellation of bookings worth Rs 2 lakh. “I have 14 horses. I have to feed them at least four times a day. One horse needs 5 kilograms of food, including wheat hay and bengal gram. But due to lockdown, farmers are struggling to sell their produce and they have been overcharging. I used to buy 40 kg of hay for Rs 700-750. Recently, I bought the same for Rs 1,200. With prices shooting up like this, we are bound to control the diet of our horses, while also ensuring that they do not fall ill,” Patel says.

For Patel this his only source of income, which has been nil for over a month.

Charotar Horse Society President Jayesh Patel says, “A horse is high maintenance in terms of food and health. We cannot leave the horses to graze like other cattle. It is a challenge for the owners. There are no government schemes for domesticated horses and they are under complete care of the owners.”

Horse owners also claim that most of their customers from June and July have also begun cancelling their bookings. “Summer is a peak time for weddings. We expect business now and in May and July. But many customers have started cancelling their bookings in anticipation that the situation may not nornalise. It will be monsoon after that and then Diwali. So basically, we might be out of work for more than six months with no income at all,” said Girish Umrigar (45) who owns four horses.

Horse cart owners have also run out of business after all public places were closed down. “I have 12 horses. There was no business even before the lockdown. People had stopped coming to gardens and other public places. At times when business was affected we used to lend our horses for wedding functions but that doesn’t seem to be the case this time,” said Jayesh Patel from Sarsa village.

“Our constant worry is regarding the feed. Either we don’t get it or it is too costly. We will see how the situation is in the coming months,” he added.