Nitish Kumar Folded His Hands Before The Media. What Made Him Angry 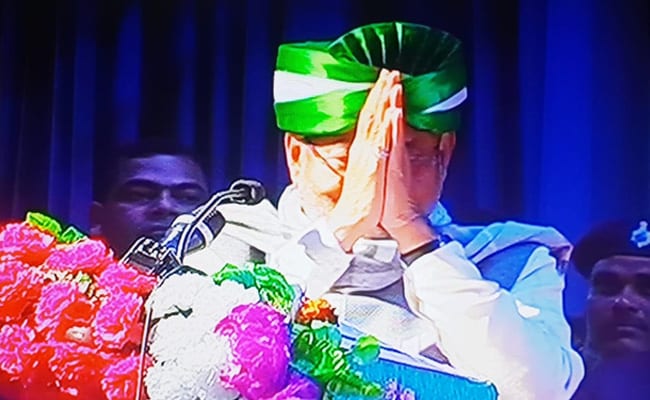 Nitish Kumar dramatically folds his hands before the media at a party event.

Bihar Chief Minister Nitish Kumar is not the best at hiding his emotions. For two days, he has dealt with undisguised fury over his close aide Pavan Varma's very public letter revealing his alleged private criticism of ally BJP. Now he is upset with the media for what he says is too much importance given to people who "just keep talking".That is what produced the photo today of Nitish Kumar dramatically folding his hands before the media at a party event.Speaking at a function to mark the birth anniversary of former Chief Minister Karpoori Thakur, Nitish Kumar first described schemes he had launched for people from the extreme backward classes."There are people who keep saying things," the Chief Minister remarked lightly. Then, with folded hands, he referred to the media contingent."These bhaisaheb (gentlemen) keep publishing whatever these people say, but see, I don't have any problem because my focus is on work," he said.Earlier today, Mr Kumar made it clear that he was not about to start any conversation or respond to Pawan Varma, the Janata Dal United general secretary who went public with a letter challenging the Chief Minister."Is that a letter? Sending an e-mail without even informing and going straight to the press doesn't make any sense to me," said Mr Kumar, the chief of the JDU.He made it clear he didn't like the importance given to Mr Varma's letter.After this, Mr Kumar went on to talk about several programmes including a human chain he organized recently to focus on tackling climate change. As he wrapped his speech, he once again turned to reporters with folded hands and said, "Please think about our own state as what happens in our state and what impact it has."

The reference was to electricity to all households and piped drinking water, both his flagship schemes, adopted by the government.Despite all the complaining, Mr Kumar, in an attempt not to upset ally BJP, avoided talking about the controversial Citizenship (Amendment) Act (CAA) and the NRC or National Register of Citizens. There was no word either on the National Population Register (NPR), which is seen to be a precursor of the NRC.Protests across the country against the religion-based citizenship law are focused on the fear that the CAA, along with the NRC, will be used to target Muslims. Mr Kumar had earlier promised to speak after January 19 on his stand on the NPR. Mr Varma's letter had goaded the Chief Minister to spell out his stand on the law that had sparked nationwide protests and questioned his decision to extend his alliance with the BJP to Delhi.