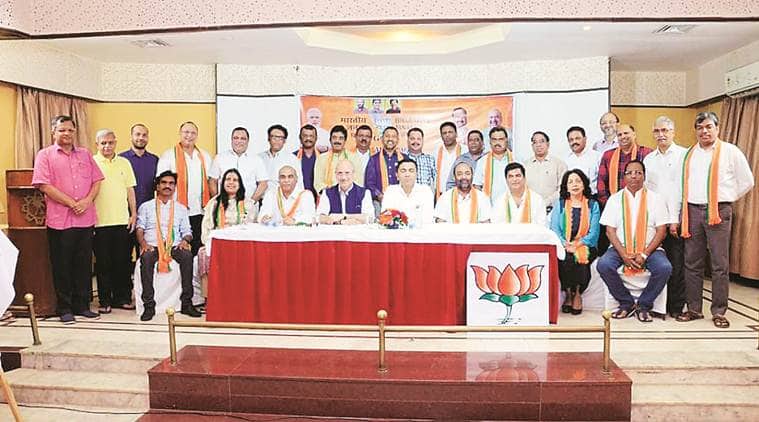 A two-day camp organised by the BJP in Goa over Friday and Saturday to bring “all BJP MLAs together” saw many legislators, including the 12 who recently switched over from the Congress, getting an introduction to the party’s ideology along with special sessions to discuss the party’s stand and legal viewpoints on Article 370 and the law against instant triple talaq, among others.

With the Assembly session having ended last week, this was the first exercise conducted by the party for all its MLAs as they look to start “a new governance chapter”, Vinay Tendulkar, MP and state BJP leader, said.

Tendulkar said, “For 12 MLAs who joined us, this was new. They said they had never had meetings beyond half-an-hour in the Congress. But here, they were in a two-day camp, discussing every detail threadbare. That itself is an introduction to how the BJP works.”

Twenty-three of 28 BJP MLAs in the state attended the workshop, with BJP functionaries calling it a “bonding session” between the old and new MLAs.

State minister Nilesh Cabral said these meetings, held annually, are meant to ensure that leaders and workers understand the party’s points of view and spread them among people. “We had three main categories: stress management, BJP’s core ideology and where it stands on key issues, and a specific briefing on the national issues — especially Article 370, triple talaq and Ram Mandir. These are important for every MLA to know to understand,” Cabral said.

Govind Gaude, an Independent legislator who supports the BJP, said he attended an hour-long session where BJP leaders asked the participants to go “deep into constituencies” and look for ideas to solve local issues. “We have roughly two years to perform. We were told that the period towards the end (of the government’s term) will go towards election campaigns, so we have to go and look to resolve all issues in our constituencies in this small period,” he said.

Tendulkar said the camp is usually meant for BJP karyakartas and mandal-level workers, but this time it included MLAs, specifically given the large number of new entrants. “There needs to be circumstances created for them to bond and discuss and exchange ideas,” he said. “We have a different way of functioning; our response mechanism is different. We told them minute things about behaviour in offices they hold, with the electorate, with the party karyakartas.”

Chief Minister Pramod Sawant posted photographs of the workshop and tweeted, “An intriguing two day session conducted by @BJP4Goa, where we discussed our roadmap for good governance.”