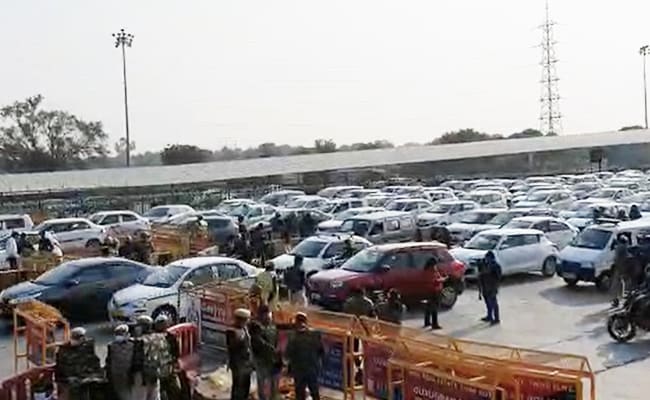 Many roads in Haryana leading to the national capital, especially those in Gurugram, were today clogged with heavy traffic as the state administration remained on high alert amid an intensifying "Delhi Chalo" protest march by farmers against the new farm laws passed by the central government in September.

Multiple traffic blocks built up through the day on many roads leading to Delhi as Haryana Police took strict measures to prevent the protesting farmers from entering the national capital. The road blocks were especially intense in places such as Kundli, near Sonipat, and on the Delhi-Gurugram border at Sirhaul and Rajokri.

The traffic build up was a result of Haryana Police personnel checking vehicles for farmers and protesters looking to enter Delhi.

The administration in Gurugram is particularly wary that farmers in Gurugram's villages may join the Punjab farmers' march towards the national capital. On Wednesday, thousands of Haryana's farmers had marched towards Delhi, breaching barricades and braving water cannons, stopping at Karnal and Sonipat for the night.

Ruled by the BJP, Haryana has used heavy force to block the protesting farmers from Congress-run Punjab from making their way into Delhi on tractors and on foot. The angry farmers fear the new agricultural laws, passed by Parliament in September, will reduce their earnings and give more power to large retailers and corporate firms.

While the Delhi government has refused to allow any rally in the city, citing the coronavirus outbreak, massive security arrangements have been made at Haryana's borders with Delhi at Gurugram and Faridabad.

Barricades have been set up near the border areas and from towns to villages in Gurugram district. Some 900 police personnel have been deployed in all across seven different places, particularly at the entry points to Delhi.

The administration has also deployed duty magistrates and the proceedings are being videographed.

This is besides the at least two tear gas vehicles each deployed at key places, along with fire engines and ambulances. Paramilitary forces, too, have been deployed to reinforce the state police's efforts.

Haryana has already sealed its borders with Punjab for two days and suspended bus services to and from the neighbouring state. The Bharatiya Kisan Union (Ekta-Ugrahan) has claimed that over two lakh farmers associated with it will enter Haryana from Punjab.

Number of bodies found after Indonesian earthquake rises to 56