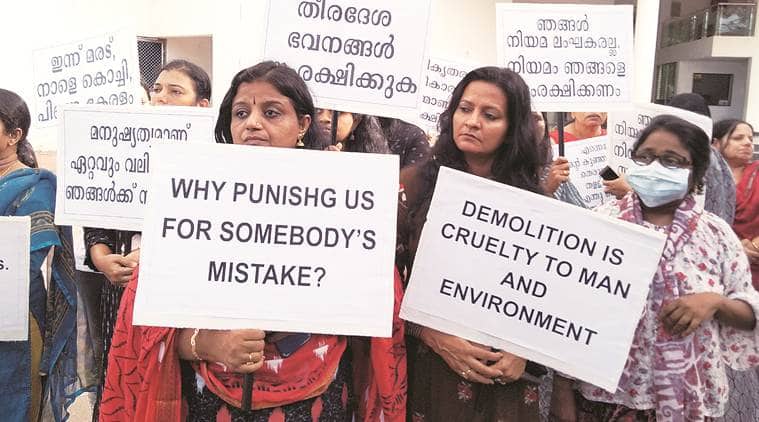 Dozens of families residing in the four residential complexes near Kochi, which faces demolition as per a Supreme Court order for violating the Coastal Regulation Zone (CRZ) Act, Monday launched a protest in front of the Maradu Municipality, stressing that they will not move out of their homes. This protest continued even as the ruling LDF government has called for an all-party meeting in Thiruvananthapuram Tuesday to brainstorm and identify solutions to the crisis. The top court has warned that the state’s chief secretary would be jailed if its orders are not complied with before the deadline, September 20.

Public and political support is increasingly pouring in for over 350 families, whose hopes are now pinned on the legal steps they are entitled to take in the case, including filing a curative petition in the Supreme Court.

“We have not accepted the evacuation notices (by the municipality) because they are issued illegally without following procedures. They affixed some copies of the notice on the compound walls of the apartment complex and we will challenge the validity of the notice in the High Court when it opens after Onam holidays. We will file a writ petition,” said Adv. Shamsudheen, a flat owner and a representative of the residents association at Holy Faith H2O apartments.

“We will continue our protests till the time the government takes a strong decision to solve the problem without demolition,” he said.

Shamsudheen said he had verified all documents with the local municipality and other allied bodies for any violations the builders may be facing at the time of buying the apartment nearly ten years ago. “I made due diligence and there was nothing improper. Everything was legally correct,” he said, adding that he was unaware of the CRZ cases until the judgment by the Supreme Court in May this year. Subsequent review petitions by the residents have been trashed by the top court.

Leaders of all major political fronts, the CPM, Congress and the BJP, have called for a humanitarian approach to solving the crisis and have demanded accountability on the part of the original builders of the apartments. Top leaders including Kodiyeri Balakrishnan of the CPM, Ramesh Chennithala and Oommen Chandy of the Congress, spent time with the flat owners, extending a hand of solidarity.

Several delegations of political parties and community organisations from across Kerala are pouring into Maradu to extend a hand of solidarity with the beleaguered families.

At the same time, TH Nadeera, the chairperson of the Maradu municipality, underlined that it has taken all steps possible in the case and was now waiting for directions from the government.

“We served the evacuation notices to the residents. Then, we called for tenders from agencies who can carry out the demolition. Technical experts from IIT Chennai will guide us. The state government has to give the directions now,” she said.