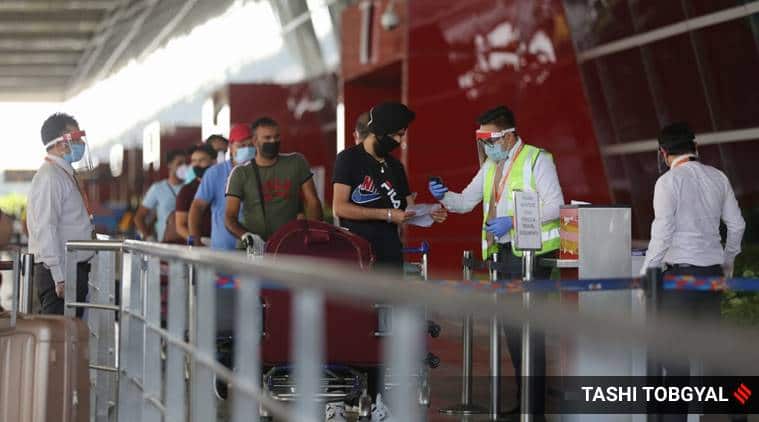 Passengers being checked and screened at the Delhi International Airport as domestics flights resumed on Monday. (Express Photograph by Tashi Tobgyal)

Even as hundreds of people moved in and out of Delhi through the airport on its first day of operations, many were left disappointed after multiple flights were cancelled following late communications between states and the Centre.

As many as 82 flights — departures and arrivals — were cancelled at Delhi airport on Monday. While the plan was to initially make a third of the pre-lockdown flights operational, some states requested the Centre to curtail the number, leading to cancellations.

Flights to and from Mumbai, West Bengal and Telangana were among those cancelled.

While some passengers were notified last night about cancellations, giving them time to make alternate bookings, others found out only at the airport.

Tapan Sen (42) had arrived at New Delhi at 5 am after an overnight train from Jammu, where he had gone for work before the lockdown and had been stuck for two months. He had a late morning flight to Bagdogra in West Bengal, where his family lives.

“Only when I tried to check in, I was told that the flight has been cancelled. I had not yet received any cancellation message from the airline,” he said.

Some, meanwhile, got a message regarding cancellation on Sunday. “I was supposed to fly to Bhopal in the evening. I decided to contact the airlines after I couldn’t check in online and was told that the flight was cancelled,” said Rajesh Kumar, who was flying for personal reasons.