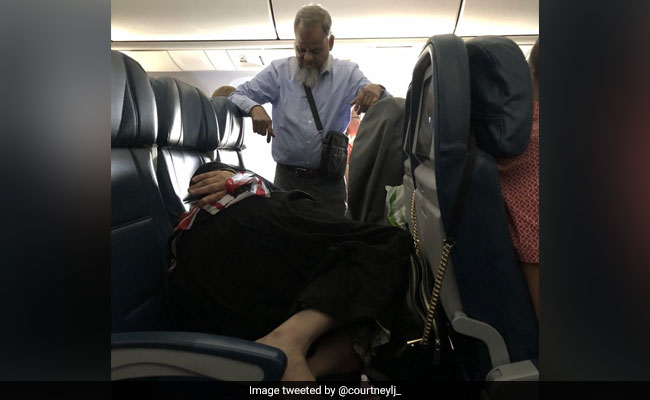 An image of a man standing in an airplane while his wife slept across a row of three seats has divided opinions on Twitter. The photograph was shared on the microblogging website by a user named Courtney Lee Johnson on Friday, where it has collected over 15,000 'likes' and thousands of comments.

"This guy stood up the whole 6 hours so his wife could sleep. Now THAT is love," he wrote. The photograph shows an elderly man standing while a woman lies across three seats in a flight.

This guy stood up the whole 6 hours so his wife could sleep. Now THAT is love. pic.twitter.com/Vk9clS9cCj

On Twitter, some disagreed with Mr Johnson's interpretation of 'love'. Many implied that the wife was selfish for letting her husband stand for six hours. However, others called his gesture "romantic" and praised him. The picture soon sparked a spirited debate on the microblogging website.

"She could have still rested her head on his lap," wrote one person - a thought that was echoed by many.

She could have still rested her head on his lap.

Some wondered how flight attendants allowed the man to stand for six hours, questioning the authenticity of the photo

The flight attendants wouldn't even allow this 😪😪😪

Take a look at some of the reactions the picture amassed:

We need to let go of this idea of love that involves suffering.

Wait they had three seats and she couldn't spare him one at least?

Lol! I suppose it's sweet but how was this allowed? https://t.co/Innp3q6mrQ

That is the ultimate love, but with a little travel experience...you know to just lay in his lap and then he can lay his head on your hips. There's a formula lol.

What do you think of the incident? Let us know using the comments section.

Yovel Zoosman stepped into the void for Maccabi against Baskonia