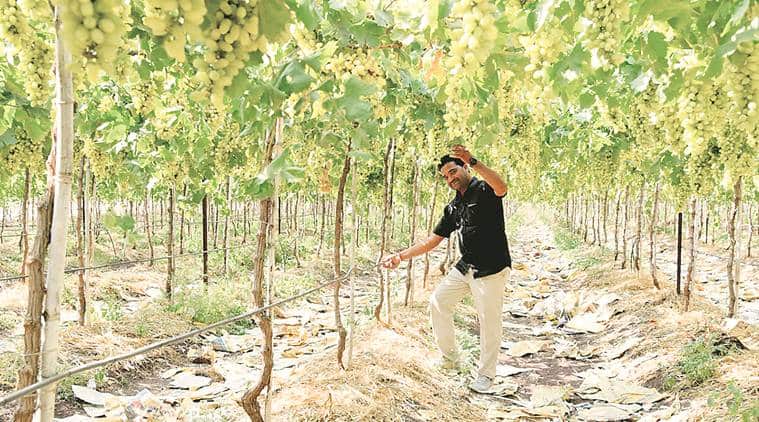 When this year’s water crisis hit several states including Maharashtra, the paucity of water did not affect the grape farms spread across Vadner Bahirav village of Chandwad taluka in Nashik. For over a decade, 37-year-old grape farmer Bapu Bhausaheb Salunke has been perfecting the application of water conservation techniques. With his success, including an increase in the yield of grapes, his friends, relatives and neighbours have followed suit, making Vadner Bahirav a high yielding grape village.

On September 25, Salunke received the first prize for “Increasing water use efficiency by an individual’’ from Jal Shakti Minister Gajendra Singh Shekhawat at India’s first Water Awards in New Delhi.

“My family owns 22 acres of land. I started farming along with my father when I was 18 years old. We lived in a modest home then and would only manage to grow crops 6 months of the year. While there is no severe water paucity in Nashik, where my village is located, my village has always suffered from water scarcity. In years hit by drought we would grow for fewer months,’’ said Salunke. Even in a good water year, the family would sow in only five acres of the total farmland.

About 15 years ago, Salunke heard of a farmer’s training programme at Maharashtra’s Water and Land Management Institute at Aurangabad. He enrolled in the 5-day training programme, came back to his village and used the family’s savings, Rs 6 lakhs, to build a one-acre watershed pond on his farm. That year, the water accumulated in the pond during the monsoons was used to irrigate a larger swathe of land. The year after, Salunke built another half-acre watershed, and then a deep well and installed two borewells. And then he started micro-irrigation methods to grow grapes.

Since then, Salunke’s farm no longer grows any other vegetables and uses the entire 20 acres to grow grapes. “I export grapes to most of the European countries apart from exporting to Bangladesh, Malaysia, China and Russia and, of course, sending my grapes to Delhi.

When I started, people in the villages, as well as my relatives, would make fun of me. But when I started doing well, and they would see that I was not only growing through the year but also the quality of my grapes had improved and so had the yield, they started following suit,’’ said Salunke.

He points out that at least 100 farmers, from his village as well as neighbouring ones, have now built similar watersheds on their farms, and grow grapes through the year.

“I had to drop out of school in class XII because my father could no longer afford to send me. I owned a cycle when I went for my first training session. Now I own two cars, seven motorcycles and five tractors,’’ said Salunke.

Salunke’s teacher, B M Shete, who was in charge of the farmers training programme at the Aurangabad Institute, said that over a lakh farmers have been trained there in water management since the 1990s.

“We started a programme for women farmers in 1995 as well and have since also started water management education programmes for children in class IX and X, “said Shete, who has retired from the institute a couple of months ago.

Micro-irrigation, explained Shete, doesn’t only ensure that the yield of grapes increases but also improves their quality. “It determines things like the sugar content of the grapes, ensuring that the grapes grown in Nashik meet international standards and can, therefore, be exported’’.