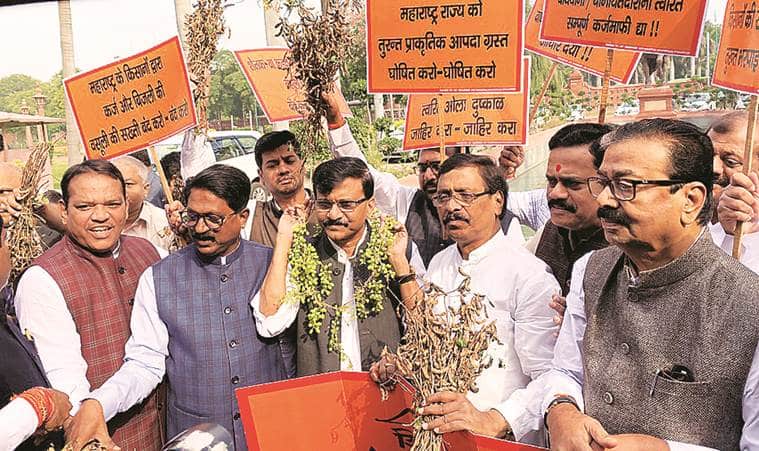 The first day of Parliament’s Winter Session on Monday witnessed disruptions and a walkout by members of Shiv Sena, which recently parted ways with the ruling BJP over who should lead the government in Maharashtra. Alleging that the government is ignoring the plight of farmers in Maharashtra, Sena MPs staged protests on the House floor and eventually walked out.

Soon after four new members took oath and the Lower House paid condolences to MPs who recently died, Sena MPs rose from their seats and started protesting over the situation of farmers. The 18 party MPs then staged a walkout, ignoring repeated appeals from Speaker Om Birla and Union Parliamentary Minister Prahlad Joshi to wait for the House to debate the issue.

Having parted ways with the BJP, the Sena is now in talks with the Congress and NCP for government formation in Maharashtra.

Earlier in the day, Prime Minister Narendra Modi appealed to MPs to ensure a smooth Parliament session and hoped for “frank discussions on all matters”. Speaking to reporters outside Parliament, he urged the Opposition for “constructive and high-quality debates”. “We want the best of best debates and hope all parties will contribute in a positive and proactive way, like they did in the previous session,” the Prime Minister said.

Further widening its distance with the BJP, the Sena in Rajya Sabha signed a notice submitted by the Trinamool Congress for discussion on the economic crisis. Besides Sena, the notice has been signed by the Congress, NCP, RJD, SP, DMK, CPM, CPI, AAP and Independent MP Vaiko.

Meanwhile, Sena MPs in the Upper House have been moved to the Opposition benches — in between the Congress and the NCP. Sources said the party had not sought a seat change.

It now remains to be seen if Sena MPs turn up at periodic meetings of Opposition parties where floor strategy is decided. The meeting scheduled for Monday could not take place as Lok Sabha was in session. Rajya Sabha had adjourned for the first half after obituary references as a mark of respect to former Finance Minister Arun Jaitley, who was the Leader of the House.

In Lok Sabha, Sena leader Vinayak Bhaurao Raut rose from the seat even before Congress leaders, seeking permission to allow him to raise the issue of farmers’ plight. As Speaker Birla took up the Question Hour, Sena MPs stood from their seat and raising slogans of “Nyay do” and “Save Maharashtra farmers”. Congress and DMK members too started protesting in the Well over the government’s “attack” on the Opposition.

Pointing out that last session ran smoothly owing to cooperation of the entire House, Parliamentary Affairs Minister Joshi said, “We are ready to debate any issue. Let the Business Advisory Committee discuss and allot time. We can discuss any issue. With folded hands, I am appealing not to disrupt the proceedings.”

The Speaker asked Sena MPs to take their seats till Zero Hour, but in vain. After raising slogans for almost 40 minutes, Sena MPs walked out.