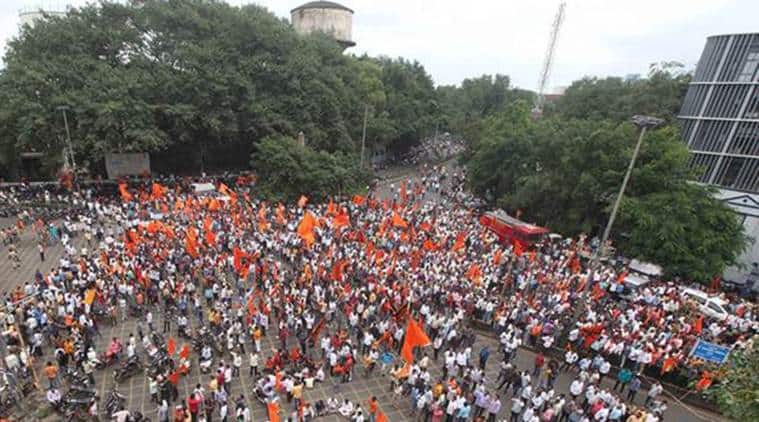 Despite latent anger apparent among Maharashtra’s politically powerful Marathas in the run-up to the Lok Sabha election, their bitterness regarding the unresolved issue of reservations failed to translate into an en bloc vote by the community against the BJP-Shiv Sena in the state.

While sections of the Maratha Kranti Morcha (MKM), which spearheaded the 58 silent marches of lakhs of Marathas in 2016-17, threatened to campaign against the Sena-BJP in March, the results in Maharashtra’s 48 seats — the BJP bagged 23 and the Sena 18 seats — is evidence that Maratha votes were fractured and not consolidated against the alliance, said leaders.

While Marathas typically have a mixed voting pattern, historian-author Shrimant Kokate of the Sambhaji Brigade said that the Congress-NCP was unable to cash in on the community’s disenchantment with the state government.

“Opposition parties and their candidates did not campaign on this issue. In the past too, Congress and NCP have been wary of raising some issues. For example, when there was popular anger against Babasaheb Purandare being given the Maharashtra Bhushan award, the Congress-NCP did not take it up,” added Kokate, whose writings on Shivaji’s parentage have stoked controversy within the community.

Kokate further said the Congress-NCP also appeared to have supported the legislation on Maratha reservation while knowing it would not stand in the courts.

Across the state, leaders said the anger in the community against the BJP-Sena government in the run-up to polling was real. But while on the one hand, Marathas continued to support Prime Minister Narendra Modi, on the other, they viewed this as a “national” election where their more state-level issues would not be relevant — whether it is the demand for a statue of warrior king Shivaji off the Mumbai coast or special aid for Maratha students.

“We’ll see what role we will play in the Vidhan Sabha elections,” said Vinod Pokharkar, a Navi Mumbai resident and a convener of MKM.

One of four MKM members who contested the elections, Pokharkar — who polled just 772 votes in Thane — said they were fully anticipating the outcome, but wanted to send a message to all parties that the Marathas are capable of posing an electoral challenge if established community leaders do not provide real representation for their issues.

“The Morcha did not advise the community not to vote for Sena-BJP. Though it’s true that the community was very angry with the government, nowhere has anybody opposed Modiji,” he added.

Other Maratha activists said local factors impacted voting behaviour, for instance, whether there was an alternative Maratha candidate or whether a particular candidate raised their issues at length. They cited the examples of Maratha leaders and senior Shiv Sena MPs Shivajirao Adhalrao Patil, who was defeated in Shirur, and Anandrao Adsul, who was defeated in Amravati.

“The best example is four-term Sena MP Chandrakant Khaire in Aurangabad, who lost to the Vanchit Bahujan Aghadi on account of Sena rebel Harshvardhan Jadhav, who polled over 2,83,000 votes,” said Ganesh Raut, a Maratha and Shiv Sena activist in Aurangabad.

Pokharkar said the disappointment in the community has not dissipated, and the MKM would meet soon to plan a roadmap ahead of Assembly elections later this year.