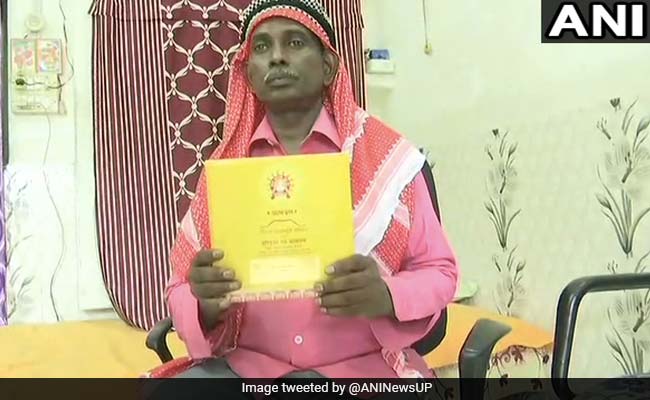 "I believe it was Lord Ram's wish that I receive the first invitation," Iqbal Ansari said

The first invitation card for the "Bhoomi Pujan" of Ram temple in Ayodhya was received by Iqbal Ansari, who was one of the litigants in Ayodhya land dispute case.

"I believe it was Lord Ram's wish that I receive the first invitation. I accept it. Hindus and Muslims live in harmony in Ayodhya. The temple's land is being worshipped and Prime Minister Narendra Modi is coming for the event to Ayodhya," Mr Ansari told ANI.

"When the temple will be built, the fate of Ayodhya will also change. Ayodhya will become more beautiful and employment opportunities for the local population will come up as pilgrims from across the world will visit the town in the future," he added.

Mr Ansari further said that people of Ayodhya follow the Ganga-Jamuni civilisation and there is no ill-feeling amongst anyone.

"The world rests on hope. I had said earlier that if there is a religious program and if they call me then I will go. There are Gods and Goddesses of every religion and every sect in Ayodhya. It is a land of saints and we are happy that the Ram temple is being built," he said.

The Prime Minister is scheduled to lay the foundation stone of the Ram temple in Ayodhya on August 5.

The construction of the Ram temple will begin after the ceremony to lay the foundation stone in which Chief Ministers of several states, Ministers from the Union Cabinet and RSS chief Mohan Bhagwat are also likely to participate.