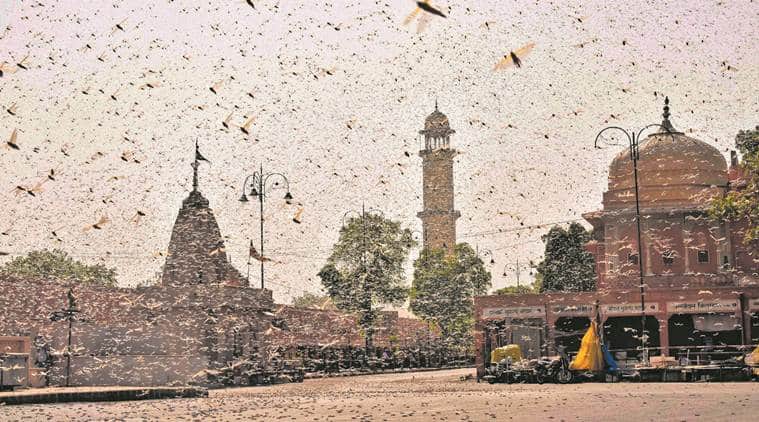 A locust swarm in Jaipur on Monday. (PTI/File)

Grappling with the Covid-19 outbreak, the country is faced with a formidable new challenge – “active swarms of immature locust” that have now reached 15 districts of Rajasthan and Madhya Pradesh.

According to the Locust Warning Organisation (LWO), which monitors locust swarms, there is no immediate danger of the swarms heading towards Delhi.

Explained | Why locusts are being sighted in urban areas, what it can mean for crops

The statement said that “since 11th April 2020, locust hoppers and from 30th April, 2020, the incursion of pink immature adults has been reported in bordering districts of Rajasthan and Punjab, which are being controlled.”

The Department of Agriculture and Farmers’ Welfare has stepped up locust control operations in Rajasthan, Punjab, Gujarat, and Madhya Pradesh, the Ministry said.

“At present 200 Locust Circle Offices (LCO) are conducting survey & control operations in close coordination with district administration and agriculture field machinery of the affected states… In Rajasthan 21 districts, in Madhya Pradesh 18 districts, in Punjab one district and in Gujarat 2 districts have undertaken locust control till now,” it said.

Speaking to the The Indian Express, LWO Deputy Director K L Gurjar said, “We are controlling the locust swarms on a daily basis but they cannot be controlled in one go because they are escaping. They are going forward.”

However, Gurjar said, there is no possibility of the insects moving towards Delhi as of now, because the “wind current is different”.

“Good rains are predicted during the first half of June along the Indo-Pakistan border that would allow egg-laying to occur.”

The Ministry said that temporary locust control camps had been established in Ajmer, Chittorgarh, and Dausa in Rajasthan, Mandsaur, Ujjain, and Shivpuri in Madhya Pradesh, and Jhansi in Uttar Pradesh. “There is no report of crop damage due to locust attack in Rajasthan, MP & Gujarat,” the Ministry said.

The Centre has, meanwhile, approved assistance of Rs 68.65 crore for Rajasthan to fight the pests.

Sources said the assistance from the National Disaster Response Fund (NDRF) in the wake of “pest (locust) attack” during 2019-20, was approved by the High Level Committee headed by Home Minister Amit Shah on May 15. An order was issued on May 23, asking the Department of Expenditure to release the assistance to the Rajasthan government.

Earlier this month, as locusts threatened the region, India had reached out to both Pakistan and Iran. India had suggested to Pakistan that the two countries should coordinate locust control operations along the border, and had offered to facilitate the supply of the pesticide malathion to Pakistan.