New footage of the clash between police and lawyers at Delhi's Tis Hazari court on Saturday shows a senior woman police officer, who was allegedly assaulted during the incident, bravely leading four cops in trying to control a large crowd of unruly lawyers before being overrun and pushed out of view of the CCTV camera. The footage has surfaced a day after accessed shocking visuals of lawyers trying to set fire to vehicles outside a room in the Tis Hazari complex in to which a group of policemen had locked themselves to protect themselves from the rampaging mob.

In the video, the woman police officer can be seen trying to plead with the lawyers as fires burn all around. The video shows the woman officer move to the head of the small group of cops that is, within seconds, swamped and surrounded by a mob of lawyers.

As the camera pans slightly, even more lawyers can be seen rushing to the scene.

In an audio clip that emerged in the aftermath of Saturday's violent clashes, two policemen can be heard discussing the alleged assault on their colleague.

Rekha Sharma, the Chairperson of the National Commission for Women (NCW), has "strongly condemned" the incident and has said she will write to the Bar Council and Delhi Police Commissioner Amulya Patnaik.

"Seeing a video on @CNNnews18 where lawyers are manhandling and misbehaving with a woman police officer and behaving like goons. I strongly condemn it. I am going to take Suo Motu and will be writing to Bar Council and @CPDelhi," she tweeted on Thursday.

Seeing a vedio on @CNNnews18 where lawyers are manhandling and misbehaving with a woman police officer and behaving like goons. I strongly condemn it. I am going to take Suo Motu and will be writing to Bar Council and @CPDelhi

The clip is part of evidence being examined in a fact-finding inquiry ordered after an unprecedented protest by hundreds of policemen on Tuesday. During the protests, junior cops accused their seniors of failing to protect them.

"I was beaten badly while trying to protect madam," one cop says, alleging he was attacked with an iron rod, chain and keys. He also said a 9mm sidearm belonging to a senior officer had gone missing.

"She was pushed. They misbehaved with her. Her shoulder and collar were dragged. All of those involved were men. She was very badly abused verbally. Madam cried outside the court," he replied. 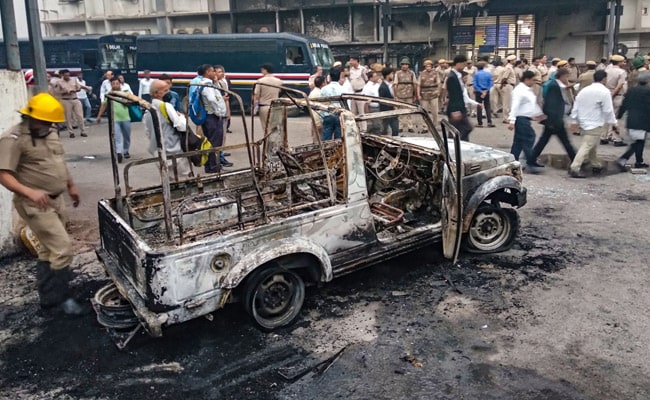 The woman officer reportedly told her bosses she was groped and beaten.

In a horrific development, she was initially told that making a formal complaint "will not get her any results and she will end up making a fool of herself", a senior officer told.

Later, however, police said charges involving the assault would be added to a first information report (FIR).

Saturday's violence started with a fight over a parking spot. Around 1:20 pm, a policeman confronted three lawyers who had allegedly parked wrongly, and asked them to remove their car. Around 30 policemen and lawyers were injured in the violence that followed.