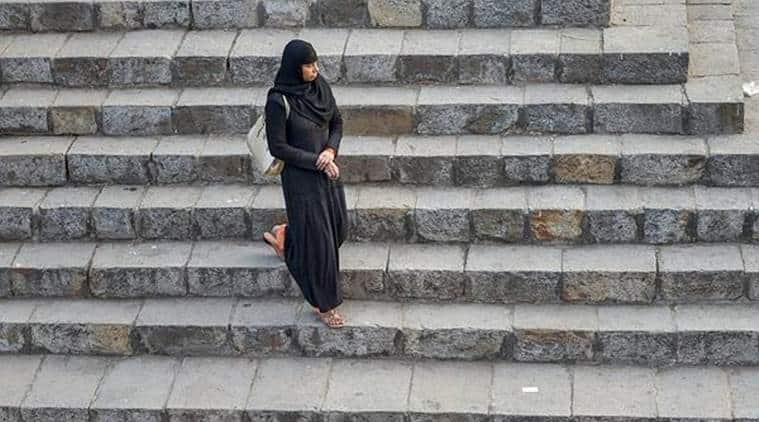 A 35-year-old Muslim man was booked for allegedly giving triple talaq to his wife here, five days after she sat on a protest along with her two young children outside his house. Her case came to light after news reports showed the purdah-clad woman sitting on a pathway near the village house at nearby Vanimel along with her five-year-old daughter and two-year-old son.

Fatimah Juveria, 24, who has been protesting outside his house to bring attention to her plight, has alleged that her husband got married to another woman after giving her triple talaq. Based on her complaint, the Valayam police here registered a case against her husband, A K Sameer, under Sections 3 and 4 of the Muslim Women (Protection of Rights on Marriage) Act, 2019 on Thursday. Sameer, 35, a native of Vanimel, works in the Gulf, the police said.

“According to her complaint, the accused gave her triple talaq on September 24 at the premises of a local court,” a police official told PTI. “Fatimah had already lodged four civil cases against Sameer and his family on various charges before. The husband’s family had also filed a case against her. All these cases were pending before courts,” the official said, adding that investigation is underway in the triple talaq complaint.

Section 3 of the act makes the pronouncement of talaq by words, either spoken or written or in electronic form or in any other manner whatsoever void and illegal, while Section 4 provides punishment with imprisonment for a term which may extend to three years and fine. Fatimah, who hailed from a poor family, said she married Sameer six years ago and they had no issues till last year.

She alleged he gave her talaq when they met at a court recently in connection with a civil case. She accused Sameer and his family for forcing her and the children out of his house and not giving them any maintenance for several months. Juveria also alleged that he had recently come here from the Gulf to marry another woman.

“He gave me talaq as he wanted to remarry. There were no other issues… he came here recently for his remarriage… He later returned to the Gulf,” Fatimah told television channels. V P Suhara, a Muslim woman activist, said it was cruel that despite the ban on triple talaq, the practice was continuing. She demanded that action be taken against the husband and family.

After the Centre brought in a legislation against the practice this year, at least four such cases were registered in Kerala. A 23-year-old woman from Payyannur in Kannur had earlier filed a case against her husband after he gave her triple talaq in writing and got married.

Similar instances have also been reported from Mukkam in Kozhikode and Kasaragod.