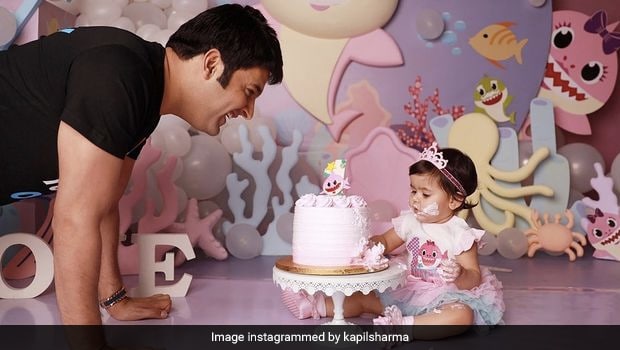 Kapil Sharma's daughter Anayra Sharma turned one on 10th December, Thursday. The proud father took to Instagram to share some pictures from Anayra's first birthday party and the internet has had a tough time to deal with the overload of cuteness ever since. The post garnered more than a million likes within a day. Kapil's fans have been sending their wishes for little Anayra from across the world. Anayra dressed in a cute pink frilly frock, with pink boots and a pink tiara, looked quite amused in the pictures. The 'baby-shark' cartoon-themed birthday party also had a special birthday cake. The pink and white creamy cake also had a pink 'Mommy Shark' cartoon cake topper. The cake was also decked up with pretty flowers and stars. In another picture, we spotted little Anayra all smeared with the cake, as Kapil vies for her attention. Kapil Sharma's wife Ginni and mother were also present at the do.

There was another cake that was made by the Daffodils Creations, a Mumbai-based confectionary. This cake was a three tier cake in pink fondue, studded with gold motifs and white little unicorns, giraffes and bunnies.

"@kapilsharma's little baby girl, Anayra turned 1 yesterday & we had the good fortune to design her cake. Thank u @rupamkaurgrewal for trusting us, you have been most gracious
Heres Wishing baby Anayra a very Happy 1st Birthday", read the caption of the Instagram post shared by them.

(Also Read: Kapil Sharma Gushing About Parathas With Makkhan On Instagram Is All Of Us! (See Pic))

Kapil Sharma is currently hosting a popular comedy show on Television with other comics like Krushna Abhishek, Kiku Sharda and Sumona. The star-studded show also features Archana Puran Singh. Kapil Sharma also tried his luck in the movies. While his debut 'Kis Kis Ko Pyaar Karu' was fairly well-received, his second 'Firangi' tanked at the Box Office. It is reported that Kapil would be featuring in a comedy web series soon.

Stove Kraft IPO To Open On January 25: All You Need To Know

Living Like A *PRINCESS* For 24 HOURS Challenge | SAMREEN ALI