"Just 2-3 Hours Of Sleep A Day": Yogeshwar Dutt On Life As A Politician 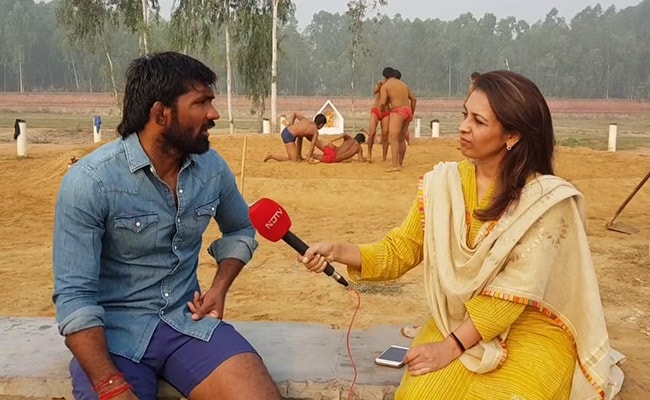 After years spent wrestling for the country's glory, Yogeshwar Dutt entered a different kind of arena when he threw in his lot with the ruling BJP last month. His fight will now be for votes in the upcoming Haryana elections, and the road ahead promises to be tough.

The wrestler, who won a bronze in the 2012 London Olympics, is already starting to feel the strain. "I hardly sleep these days. Two or three hours at best," he told NDTV upon being visited at his wrestling academy in Sonepat's Bali village. "Politics is nothing like wrestling. It's a completely different ball game."

However, Yogeshwar Dutt - set to contest the October 21 polls from Baroda - does not regret his move. "The people here want better facilities, and it is only by entering politics that I can resolve their problems," he said.

The sportsperson had joined the BJP along with former Indian hockey captain Sandeep Singh on September 26. His decision came a month after another celebrated wrestler - Babita Phogat - decided to align with the ruling party.

The Padma Shri winner said he had definite reasons for choosing the BJP. "The party's glory stems from Prime Minister Narendra Modi's policies, whether it is the scrapping of Jammu and Kashmir's special status or the 2016 surgical strikes," he told NDTV. "I do not want to practice politics of deceit. The country will grow in might as soon as our leaders realise that they are supposed to work for the people, not themselves."

The key to being a good politician, Yogeshwar Dutt claimed, was working for the people regardless of the position one holds. "It doesn't matter to me if I become an MLA, MP or Minister. The people tell me that they will send me to the Vidhan Sabha, so I can raise issues related to water shortage in the state. I tell them that I have come from their midst, and will always remain in their midst. If I do not fulfil my promises, do not even let me into your village next time," he said.

He went on to praise PM Modi over his decision to divert water flowing into Pakistan to fulfil the needs of those living in Haryana, Punjab and Rajasthan. "This will solve our water shortage problems and benefit farmers in the state," he said.

Among the other achievements by Yogeshwar Dutt through his sporting career are gold medals in the 2010 and 2014 Commonwealth Games.