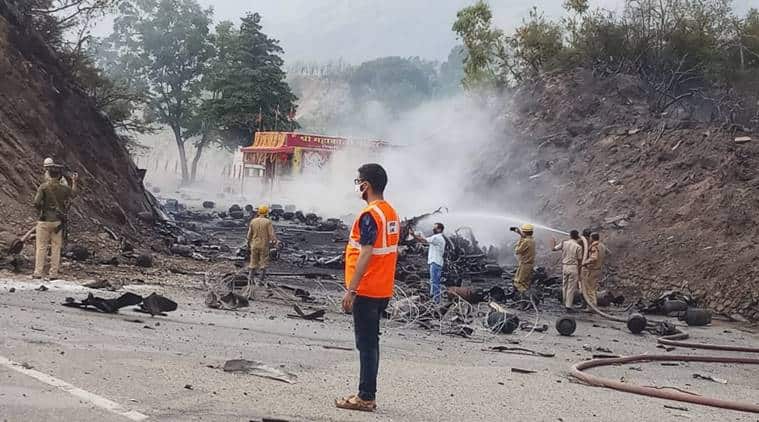 Except for the truck and the LPG cylinders, there was no other damage to property in the fire

A major catastrophe was averted along the Jammu-Srinagar national highway on Friday, when a driver of a truck loaded with LPG cylinders drove the vehicle to a deserted place on the road soon after realising that it had caught fire.

Three fire tenders doused the fire in less than an hour, said Udhampur Deputy Commissioner Piyush Singla, adding that they had also approached the Indian Air Force to keep its choppers on standby for carrying out firefighting operations in case of fire spreading to nearby forests.

Except for the truck and the LPG cylinders, there was no other damage to property in the fire, he said, adding that vehicular traffic too was restored on the national highway.

The cause of fire was yet to be known, he said, adding that the police have registered a case and will be investigating the matter. The truck driver is also safe.

Sources said the incident took place around 2.45 pm when the truck loaded with 324 LPG cylinders was on way to Kashmir from Jammu. However, as it was passing outside the Kali Mata temple along the highway near Tikri, someone noticed fire inside the vehicle and immediately alerted the driver. Showing his presence of mind, the driver drove the truck away from the temple and stopped it at a place on the road passing through two mounds so as to avoid motorists moving along the road.

While there weren’t many vehicles plying on the road in view of the lockdown, police personnel posted at a nearby checkpoint immediately stopped them from proceeding ahead as a precautionary measure as LPG cylinders started exploding one by one.