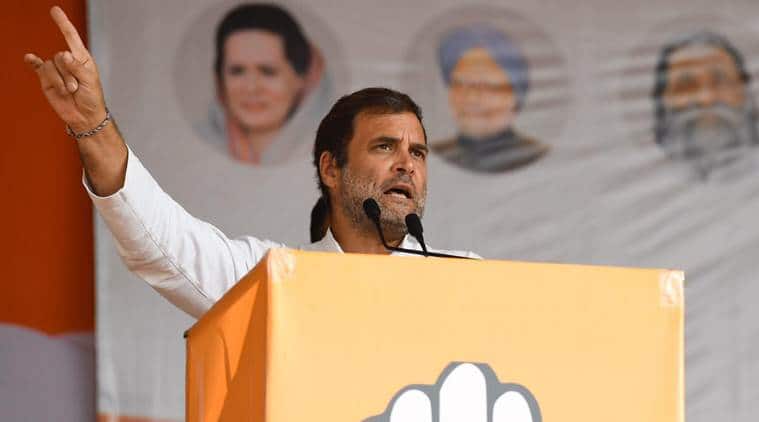 “…Farmers in Jharkhand will also get the same MSP rate, if we win the election,” he stated.

Congress leader Rahul Gandhi on Thursday promised to waive farm loan up to Rs 2 lakh and procure paddy at Rs 2,500 MSP if the opposition alliance came to power in Jharkhand like done in Chhattisgarh, Madhya Pradesh and Rajasthan.

Gandhi addressed two election meetings at Rajmahal and Mahagama in the poll-bound Jharkhand during the day in favour of the opposition coalition comprising the Congress, JMM and the RJD.

Addressing a poll meeting in Rajmahal in support of JMM candidate Ketubbudin Sheikh, Gandhi said farmers would receive a minimum support price (MSP) of Rs 2,500 for every quintal of paddy, if the Cong-JMM-RJD coalition wins majority. “The first priority of the opposition alliance would be to waive farm loans up to Rs 2 lakh. The Congress governments in Chhattisgarh, Rajasthan and Madhya Pradesh procure paddy at Rs 2,500 MSP. Farmers in Jharkhand will also get the same MSP rate, if we win the election,” he stated.

Asserting that his party has always fulfilled its promises, he slammed the BJP-led government at the Centre for the “rise in unemployment” in the country. “Unemployment rate is at a 45-year high. The Centre’s decision to demonetize high-value notes hit the poor hard. People are still reeling under its effect.

“The BJP government, however, continues to function for the benefit of just 10-15 industrialists,” Gandhi said at the rally, which lasted for around 10 minutes. He also said that if voted to power they would protect land, forest and water of the poor and tribals in the state.

Addressing another rally at Mahagama block in Godda assembly constituency, Gandhi assured that drinking water would be ensured to the people of Jharkhand if the opposition grouping formed a ministry in the state. “It was during the UPA government that the growth rate remained at nine per cent, but unemployment now is worse in 45 years,” Gandhi said.

Congress’s Deepika Pandey is contesting from Godda seat, which goes for polling in the fifth and final phase on December 20 along with the Rajmahal among others.