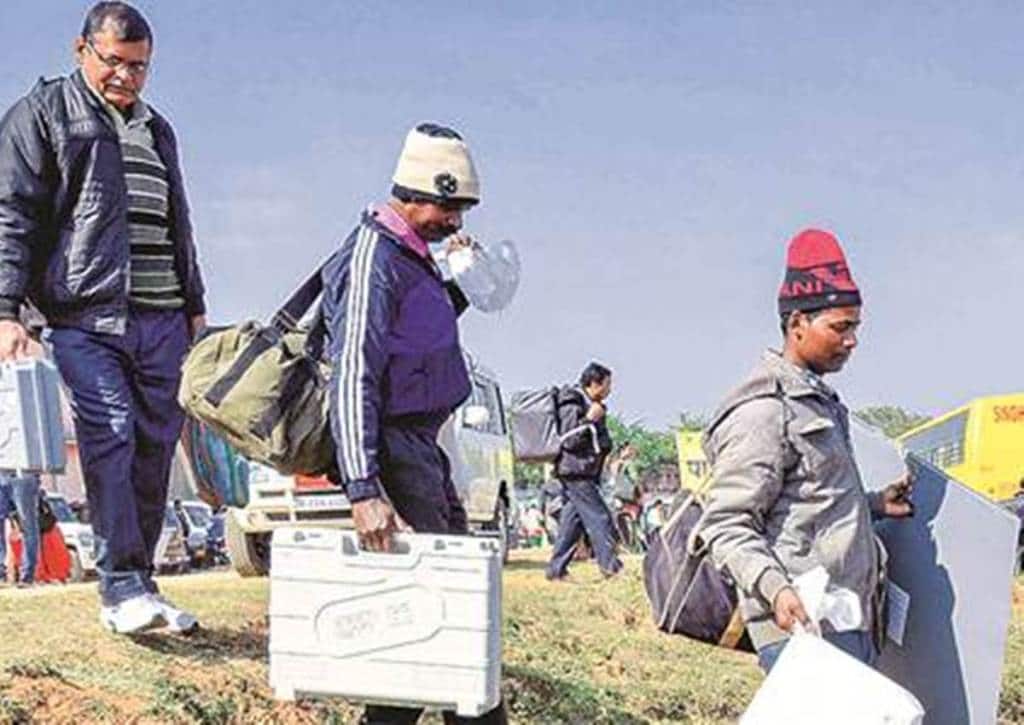 Election officials with EVM machines at Tamar constituency in Jharkhand on Friday. PTI

Tamar constituency is poised for an electoral face-off between a murder accused, the alleged conspirator in the case and the murder victim’s son.

The contest for Tamar — a seat reserved for tribals and which goes to polls on December 7 — is between Vikas Munda (JMM), the son of slain MLA Ramesh Munda; Kundan Pahan (Jharkhand Party), murder accused and a surrendered Maoist; and alleged conspirator Gopal Krishna Patar alias Raja Peter, who is fighting on an NCP ticket.

Phase 2 today, CM in the fray

Vikas is the only one campaigning in person. The other two candidates are in jail, and their families are helping them campaign. Ramesh was shot in 2008, when he was a JD (U) MLA from this constituency. Kundan, including other Maoists, allegedly carried out the killing. Police had said that Kundan was wanted in 128 criminal cases for the murder of several policemen and looting a van carrying crores in cash. He surrended in May 2017.

Barrigada village of Tamar constituency is Pahan’s home. The village lacks basic facilities such as roads, and toilets have reached few houses. Kundan’s elder brother Hari said, “Kundan joined CPI (Maoist) because our land was forcibly taken away from us… Now that he has surrendered, he wants to fight the election and we helped him campaign…”

Based on Kundan’s confession, the NIA, which was investigating the case, said that Peter was the “mastermind and originator of the conspiracy” to kill MLA Ramesh. The NIA had said, “It was revealed that Raja Peter had political ambitions and in order to achieve this, he criminally conspired with the Maoists, gave them huge cash and a weapon to carry out the given task. He also took the support of Maoists in winning the by-election after the death of the sitting MLA and subsequently became a minister in the Jharkhand government.”

While campaigning, Peter’s wife Arti said the allegations were “baseless and people know it”.

Budhram Suansi, a resident of Tamar, said that Peter’s wife was seeking votes on sympathy grounds. “He helped a lot of people and has a support base. His wife is capitalising on it. There will be a tough contest,” said Suansi.

After Ramesh’s death, Peter contested the by-election and defeated then Chief Minister and JMM chief Shibu Soren. He was again elected in 2009 Assembly polls and went on to become a minister. However, in 2014, Vikas won from this constituency on an AJSU ticket. He later joined the JMM. Many residents said a lot of issues in the constituency need redressal, and people support Vikas. Mohammad Iqbal, a voter, said: “Many don’t like the candidate, but they will vote for JMM.”

Also in the fray is AJSU Durlabh Singh Munda and BJP’s Reeta Devi. Iqbal said that AJSU has a support base of OBC community and the contest could be “triangular”. Tamar is a Maoist-affected constituency with 2 lakh electors.