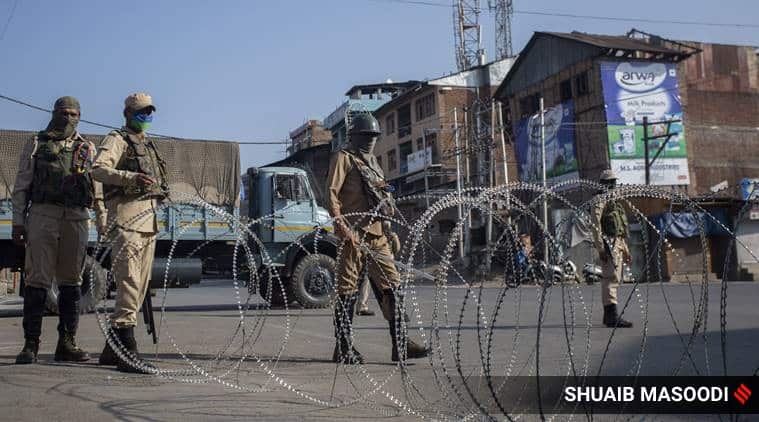 A paramilitary soldier stands near barbed wire at a checkpoint during the curfew in Srinagar. (Express photo by Shuaib Masoodi)

Jammu and Kashmir Article 370 LIVE Updates: Ahead of the first anniversary of the revocation of special status to Jammu and Kashmir under Article 370, the UT administration has imposed curfew across the Kashmir valley from Monday late evening. The decision was taken at a core group meeting of security officials, civil administration, and intelligence agencies, which was chaired by General Officer Commanding 15 Corps B S Raju and Director General J&K Police Dilbag Singh.

Srinagar and other districts of Valley have imposed strict restrictions till end of day on August 5. However, amid the Covid-19 pandemic, medical emergencies and movement of staff with valid cards and passes issued by the administration have been exempted from the restrictions.

Months after coming to power for a second term, the Narendra Modi-led NDA government had passed the Jammu and Kashmir Reorganisation Act, 2019, in Parliament, thus striking down Article 370 and Article 35A, which gave the erstwhile state of J&K autonomy. Following this, mobile phone networks, landlines, and internet access were cut-off across the state and political leaders, including former chief ministers Mehbooba Mufti, Omar Abdullah, Farooq Abdullah, and Sajad Lone, were kept under house arrest. So far, only Omar and Lone have been released from detention.