AS THE visiting US Secretary of State Michael R Pompeo meets Prime Minister Narendra Modi and External Affairs Minister Subrahmanyam Jaishankar on Wednesday, New Delhi will stay firm on the S-400 deal with Russia and seek waiver under the US law.

Jaishankar and Pompeo will prepare the groundwork for the Prime Minister’s meeting with US President Donald Trump on the sidelines of the G-20 summit in Osaka. Though the timing has not been finalised yet, it is likely to be held on June 28.

Jaishankar is scheduled to accompany the Prime Minister for the G-20 summit, just like Pompeo will join Trump in Japan. This is a departure from the past, as then External Affairs Minister Sushma Swaraj did not accompany the PM on his overseas visits. Both Jaishankar and Pompeo are likely to be present at the Modi-Trump meeting. Jaishankar, who will be meeting his American counterpart Pompeo for the first time, is also likely to counsel the US interlocutor that both US and Iran should “de-escalate” the situation, diplomatic sources said.

Jaishankar and Pompeo are likely to broadly discuss the friction over trade, but sources said that since the two ministers are not in-charge of the trade portfolio, they will leave the specific and detailed discussions to be carried out by commerce ministers from both sides. So, the issues related to data localisation, e-commerce and concerns over the 5G and Huawei will be dealt separately by the concerned ministries.

Speaking to reporters in Gandhinagar, Jaishankar said: “We will definitely discuss issues related to trade between the two countries… Both the countries have their own interests… Sometimes, there could be some dispute because of that. Diplomacy is about finding a common ground… And that will be our attempt. We will hold talks with a positive approach.” 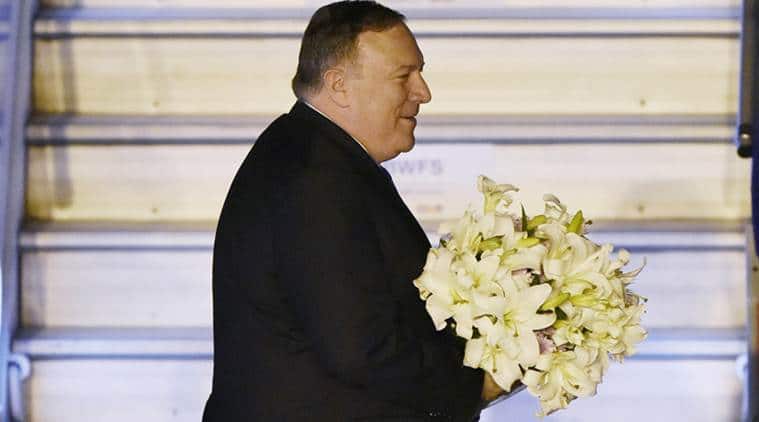 During Pompeo’s visit, no MoUs or agreements are expected to be signed, but sources said the two sides have made considerable progress on the Industrial Security Annex agreement. Last year, after the India-US 2+2 talks, both sides announced their readiness to begin negotiations on the Industrial Security Annex (ISA) that would support closer defence industry cooperation and collaboration.

However, sources said New Delhi’s “longstanding” defence relationship with Moscow cannot be wished away, and India feels that it qualifies for a waiver under the CAATSA (Countering America’s Adversaries Through Sanctions Act). The S-400 Triumf air defence system deal, which is valued at over $5 billion, was signed last year.

According to sources, the meeting between Jaishankar and Pompeo is being looked at as a “getting to know each other” kind of a meeting. Sources said Jaishankar and Pompeo will not be looking at “resolving issues”, but at achieving a common understanding on how to proceed ahead so that they can manage their differences and build on their convergences.

Fighting cross-border terrorism will be high on the agenda of the two ministers, sources said. The regional situation, including the developments in Afghanistan, will also find space in the discussions. Pompeo is also likely to call on Modi at his residence, and will make a policy speech on Wednesday evening. He will meet the business community in India, before he leaves for Osaka on Thursday morning.
Modi, accompanied by Jaishankar, will leave for Japan on Wednesday night.

Thiago Alcantara to miss Dortmund clash due to injury