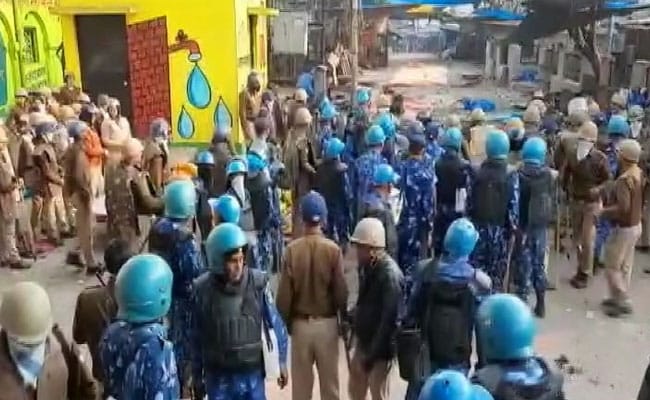 Violence broke out this evening between police and anti-citizenship law protesters in the Uparkot Kotwali area of Uttar Pradesh's Aligarh, resulting in stone pelting, a portion of a shop in the area being set on fire, a police vehicle being vandalised and some police officers being injured. A motorcycle belonging to one of the policemen was also set ablaze by protesters.

Following the clashes, mobile internet has been suspended for a six-hour period starting 6 pm.

According to the cops the clashes took place after some protesters, who had gathered outside a police station to ask for permission to erect tents for protection against bad weather, allegedly threw stones and vandalised the vehicle of a local police officer - the Station House Officer -, prompting the cops to respond with a lathi-charge and fire tear gas shells to disperse the mob.

Speaking to reporters after the incident, Aligarh District Magistrate Chandra Bhushan Singh told reporters the violence was under control and the mob had been dispersed.

"(The) violence started around 5 pm when a local police officer's vehicle was pelted with stones. Soon after, the mob started throwing stones at us ... to disperse them we had to use tear gas shells. The situation is under control," Mr Singh said, adding that the cops were also investigating the role of Aligarh Muslim University students in instigating the crowd.

A Rapid Action Force (RAF) of UP Police has been deployed.

"We have held peace meetings and asked Muslim community leaders, including the Imam of the Jama Masjid, to act as interlocutors," Mr Singh added.

The clashes took place away from Aligarh's Delhi Gate area, where a 24-day-long peaceful protest against the Citizenship Amendment Act, or CAA, is being held.

On Saturday women protesting at that site had approached the police for permission to erect tents as protection from bad weather - it rained in Aligarh on Friday. Permission had been denied and the irate women began an impromptu sit-in protest outside the Kotwali Police Station.

The Aligarh District Magistrate said police had made attempts to persuade the women to disperse but they had refused to do so. Failing this, today, police attempted to forcibly remove the women.

The clashes took place on the same day as violence between pro- and anti-citizenship law protesters near northeast Delhi's Jaffrabad area, where a protest against the law has been on since Saturday night. The trouble started after local BJP leader Kapil Mishra held a rally in favour of the law.

Delhi Police have said the situation is under control, although protesters have yet to disperse.