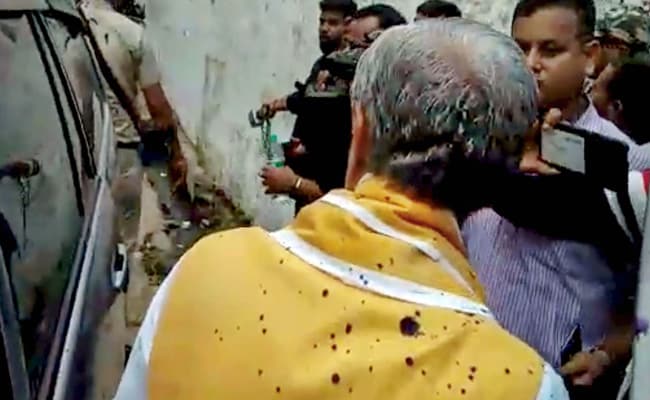 Ink was thrown at Union Minister Ashwini Choubey this morning after he completed his visit to- the Patna Medical College & Hospital to visit dengue patients. The state is battling a severe outbreak of dengue with more than 1,500 people struck down over the past five days. This comes after widespread flooding killed more than a hundred people this month and left large parts of Patna under water, leading to the spread of the disease. The capital city is the worst affected with over 900 reported cases.

Ashwini Choubey has hit out at his attacker, who is believed to be a supporter of the Jan Adhikar Party floated by former MLA Pappu Yadav, labelling the incident an "attack on the public and democracy".

In a video shared by news agency ANI, the minister can be seen leaving the hospital after the ink attack - he is wearing a yellow jacket that has ink stains on the back and ink stains are also visible on his car.

"It was thrown at the media. Some of the ink fell on me," the minister says as he enters his car - a Toyota - which had been quite liberally spattered with the blue ink.

#WATCH Bihar: A man threw ink on Union Minister of State for Health & Family Welfare Ashwini Choubey while he was visiting dengue patients at Patna Medical College & Hospital. The man managed to escape. Minister says "Ink thrown on public, democracy and the pillar of democracy." pic.twitter.com/gVxsfdLz8d

"Kahi paani nahin hein (there is no water anywhere)," a man can be heard saying as Mr Choubey and his entourage prepare to drive away.

"The ink was thrown at the journalists and some of it on me. The people behind this are the same criminals who try to become political leaders today. Today ink has been thrown on the public, on democracy and the pillar of democracy," Mr Choubey told ANI as he was leaving.

This isn't the first time ink has been used as the weapon of choice for political protests in this country. Delhi Chief Minister Arvind Kejriwal has borne the brunt of these attacks, having been targeted with ink on at least two occasions; and once with chili powder.

In 2016 the Aam Aadmi Party (AAP) chief was inked in Rajasthan. Earlier that year a party rebel threw ink at him in a Delhi stadium.

Hundreds have staged protests against Nitish Kumar's government over its handling of the floods and dengue crisis in the state. These outbursts come only months after the JDU leader was heavily criticised for his delayed response to the Acute Encephalitis Syndrome (AES) outbreak that killed nearly 140 children in July.