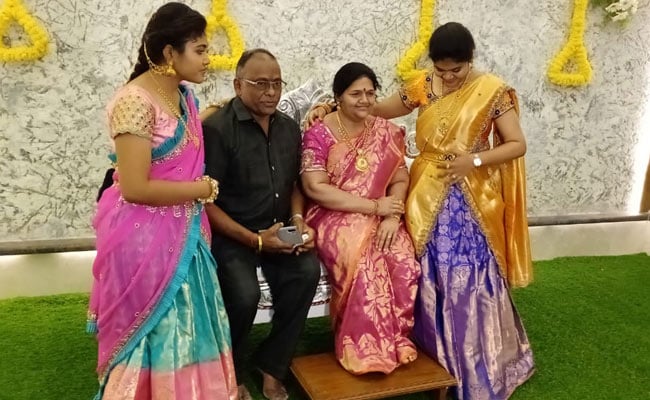 Industrialist Shrinivas Gupta and his daughters with the silicone wax statue of his dead wife, Madhavi.

An industrialist in Karnataka's Koppala district, some 353km from Bengaluru, celebrated the house warming ceremony for his wife's dream home with a life-size silicone statue of hers three years after she died in a car accident.

The overwhelming gesture left guests at the ceremony speechless as they saw the lady of the house sitting smilingly on a white sofa at the entrance, dressed in a pink silk saree and all her finery.

According to industrialist Shrinivas Gupta, the statue was installed just ahead of the ceremony so his wife, Madhavi, could always live in her "dream home".

"It is a great feeling to have my wife again at my home; this was her dream home. The house was designed as per her wishes and she was alone was monitoring the progress of the construction of the house," Mr Gupta said, adding he and his daughters decided on getting the statue made as they miss her.

"Artist Shreedhar Murthy from Bengaluru took a year to make the statue. Silicone was used instead of wax for durability," he said, adding that the statue was built inside the house with the help of their architect Ranghannanavar.

"Our architect suggested I get a silicone statue instead of a wax statue as we live in Koppal, which is a hot place, and an AC can't be used all the time to maintain correct temperature for wax. So, as per the suggestion, we got the silicone statue prepared," Mr Gupta added.

Madhavi's effigy cannot walk or talk, but it left every visitor speechless.