India visit has been unforgettable extraordinary and productive donald trump 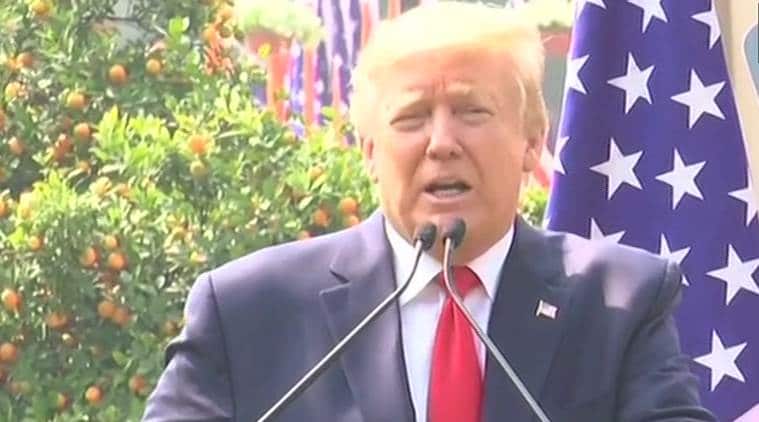 Talking about the challenges of terrorism, Trump said, “We agreed to cooperate in dealing with radical Islamic terrorism.” (ANI)

Prime Minister Narendra Modi and US President Donald Trump resolved to fight terrorism during their bilateral talks on Tuesday in the national capital. Issuing a joint statement after their meeting at the Hyderabad Bhawan, Modi said, “We(India and USA) resolved to step up efforts to make those who support terrorism, responsible.”

The prime minister asserted that the two countries have decided to take Indo-US ties to a comprehensive global partnership level. Both countries also inked three MoUs, including one in the energy sector. “Today we discussed every important aspect of US-India partnership, be it defence and security, energy strategic partnership, trade or people to people ties. The strengthening in defence ties between India and US is an important aspect of our partnership,” said Modi

“Our commerce ministers have had positive talks on trade. Both of us have decided that our teams should give legal shape to these trade talks. We also agreed to open negotiations on a big trade deal,” added the prime minister.

Thanking Modi and the people of India for the “exceptional generosity”, Trump said the visit has been “unforgettable, extraordinary and productive.” We finalised defence deals worth $3 billion,” announced Trump adding that there was “focus on having comprehensive trade deal” during the bilateral talks. “We discussed 5G telecom technology, the situation in Indo-Pacific,” said the US president.

Talking about the challenges of terrorism, Trump said, “We agreed to cooperate in dealing with radical islamic terrorism.”

Earlier, Trump was accorded a ceremonial welcome at the Rashtrapati Bhavan. President Ram Nath Kovind and Prime Minister Modi welcomed Trump and First Lady Melania Trump at Rashtrapati Bhavan. The US president also received a tri-services guard of honour at the presidential palace.

The Trumps, who also paid homage to Mahatma Gandhi at his memorial Rajghat here, arrived in Ahmedabad around noon on Monday for the first leg of their 36-hour India visit.