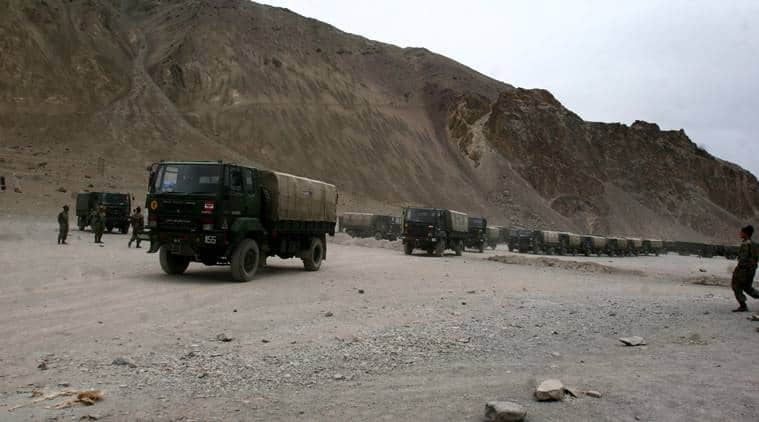 Army vehicles stop at a base camp in Leh in the cold desert region of Ladakh, 434 kms from Srinagar. (Express File Photo: Shuaib Masoodi)

India-China Border Latest News Live Update: “On the late-evening and night of June 15, a violent face-off happened as a result of an attempt by the Chinese side to unilaterally change the status quo,” the Ministry of External Affairs said Tuesday, a day after an officer and two soldiers were killed in the Galwan Valley along the disputed India-China border Monday night. The Army, in a statement, said there were casualties on both sides.

“During the de-escalation process underway in the Galwan Valley, a violent face-off took place yesterday night with casualties on both sides. The loss of lives on the Indian side includes an officer and two soldiers. Senior military officials of the two sides are currently meeting,” the Army said in a statement.

“Given its responsible approach to border management, India is very clear that all its activities are always within the Indian side of the LAC. We expect the same of the Chinese side,” the MEA said in a statement. Meanwhile, Beijing urged India to “strictly restrain its frontline troops from crossing the border or taking any unilateral action that may complicate the border situation”.

The last deaths at the Line of Actual Control (LAC) were in 1975 when an Indian patrol was ambushed by Chinese soldiers in Arunachal Pradesh. A violent clash between the two sides on the border had taken place at Nathu La in 1967.