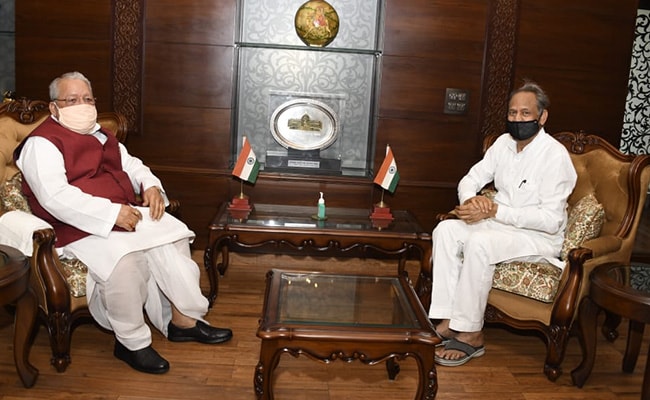 Chief Minister Ashok Gehlot went to the Governor's House to meet him on Wednesday.

Ashok Gehlot, signaling that he wanted the unending back-and-forth with the Governor to end, met with his cabinet this evening and decided to ask for a session exactly 21 days from when the first request was made, sources say.

This marks a significant concession from the Gehlot cabinet's earlier stance that the Governor was blocking proposals using questions that were not in his jurisdiction.

After the Governor's third snub this morning, the Chief Minister met with him for the fourth time since the Congress rebel crisis broke out earlier this month. "I am going to meet him to find out what he wants. Whether he seeks a notice of 21 days or 31 days to call assembly session, we will be victorious," Ashok Gehlot told reporters.

The Chief Minister, fighting rebellion by his sacked Deputy Sachin Pilot and at least 18 more MLAs, has been pressing for an assembly session since last week and protested for five hours at the Governor's residence last Friday. He believes he is well-placed to win a trust vote held right about this time and had submitted to the Governor a list of 102 MLAs, just one past the majority mark of 101 in the 200-member Rajasthan assembly.

Mr Gehlot had sent his third proposal yesterday after the Governor wrote that he was not against calling an assembly session but he needed clarifications.

Mr Mishra asked whether the Chief Minister wanted to bring a trust vote; if that is the case, a 21-day notice is not needed for a special session. But Team Gehlot did not mention a trust vote in any of its requests. "If the governor wants us to have a floor test he should direct us, we are in a majority. Why should we ask for a floor test," said Mahesh Joshi, Chief Whip, Rajasthan.

The Governor had also said it would be difficult to call all MLAs at short notice during the pandemic. To which, the Gehlot government said assembly sessions had been held in Goa, Manipur and Puducherry in the middle of the virus fight. It also said it was the Speaker's job to decide on safety measures and seating arrangements.

Last Friday, the Governor had given six reasons to nix Mr Gehlot's proposal. One of them was that a case was being heard in the Supreme Court. To tackle the last point, Rajasthan Speaker CP Joshi dropped a petition in the Supreme Court involving his powers to disqualify 19 rebel MLAs.