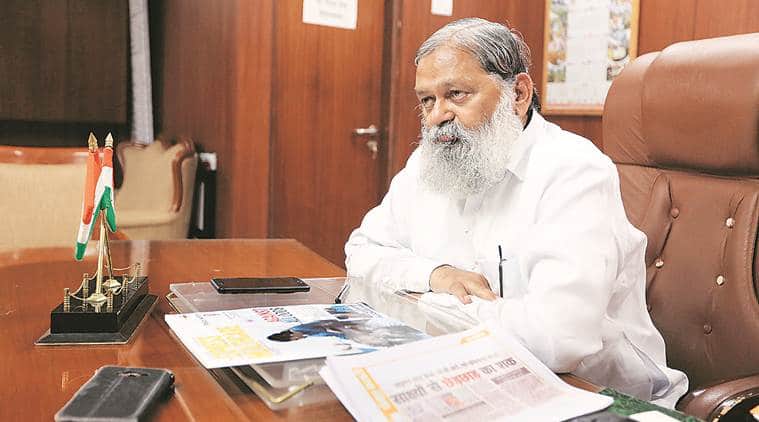 A large number of people daily approach Vij to lodge their complaints especially related to police directly to him. (File Photo)

Haryana Home Minister Anil Vij has pointed out to the state DGP that the police department is yet to form a special cell headed by an SP-level officer that will monitor progress of those complaints which are directly handed over to the minister. He also said that special detective units at the district-level to probe the heinous crimes are also yet to be constituted.

When contacted by The Indian Express on Sunday, Vij confirmed that he has written a letter to the DGP about works which are yet to be taken care by him. A large number of people daily approach Vij to lodge their complaints especially related to police directly to him. Vij was sworn in as Home Minister on November 14, 2019, days after formation of the BJP-JJP alliance government in Haryana.

According to Vij, the police department had earlier said that an SP-level officer would be appointed to ensure follow up of the complaints which are handed over to him. “They (police headquarter) send the complaints to the police stations but there is nobody who can check if action has been taken on them. As compliance report, my office is just informed that the complaints have been forwarded to the SPs concerned,” said the Home Minister.

According to the Home Minister, special detective cells at the district level to probe heinous crimes are also yet to be constituted. A six-time MLA, Vij is also keen to look after the problems of policemen but says the police department is yet to form a special cell to look into their demands.

Terming the letter to the DGP as a “routine matter”, Vij said that he is satisfied with the functioning of the current DGP Manoj Yadava. When asked about Vij’s letter, Yadava said that he has not received any such letter. “It’s not in my knowledge,” he told The Indian Express.

Meanwhile, the Home Minister said that the Home Department has cleared the file to set up “Haryana Narcotics Bureau” to curb the drug abuse and drug peddling across the state. Now, the Chief Minister will take a call on the proposal. According to the minister, the proposed bureau would work to completely control the drug peddling across the state.

The Home Minister had earlier set up a three-member committee headed by Home Secretary Vijay Vardhan to suggest improvement in the functioning of the CID. However, later Vij was stripped off the charge of intelligence wing.