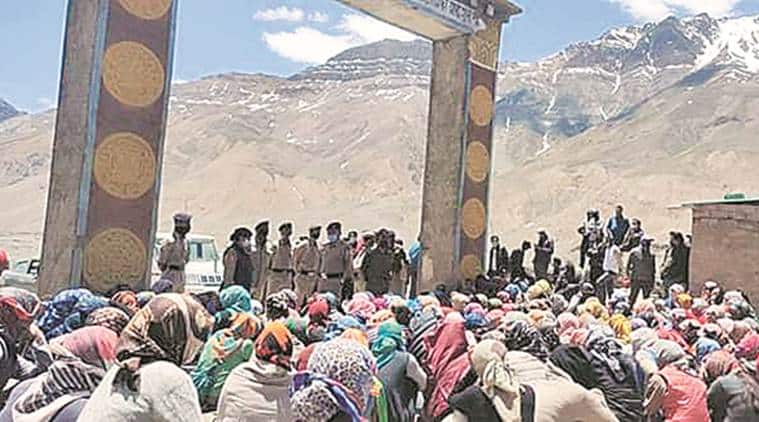 Over 200 members of the Mahila Mandal had protested against Agriculture Minister Ram Lal Markanda. (Express Photo)

A woman in almost every household of Kaza village in Spiti has been booked by the local police for holding a demonstration against Himachal Pradesh Agriculture Minister Ram Lal Markanda earlier this month.

Police have initiated legal action against over 200 members of the Mahila Mandal who had participated in the protest at the entry gate of the village on June 9, demanding that the minister and his entourage be placed under quarantine for entering the valley, as per the Covid rules decided by a people’s committee. Markanda, the MLA from Lahaul-Spiti, turned back and left his constituency. The next day, police registered an FIR against the protesters, who learnt about it when they started receiving summons a few days ago.

Kaza village has a population of around 1,700. With an FIR against over 200, more than 10 per cent of the total population of the village now stands accused in the case, booked under Sections 341 (wrongful restraint), 143 (unlawful assembly) and 188 (disobedience of public order) of the IPC.

Mahila Mandal president Sonam Dolma, who was also booked for taking part in the protest, said: “Police were coming to every household to identify women protesters. So we submitted a list ourselves. The names include women from almost every village household, and now they all stand booked.”

There have so far been no arrests in the case.

As is the case with many tribal areas, collective decisions taken by local organisations sometimes carry more weight than government regulations. In the case of Spiti, there is a local committee comprising members from the five monasteries (Gompa) and other community leaders.

Fearing that the disease might wreak havoc in the valley, the committee banned the entry of outsiders on March 15. In late April, when the government allowed Himachalis to return home, the committee decided to enforce quarantine on all returnees.

Residents said they stood guard at the village gate to ensure compliance with these norms. On June 9, members of the Mahila Mandal, Yuva Mandal and Beopar Mandal and others had gathered near the gate to discuss local issues with the government when a convoy of vehicles carrying Markanda arrived there.

“It was a spontaneous protest to ensure that the MLA observes quarantine just like the others,” said Yuva Mandal president Kesang, who was part of the protest.

Markanda told The Indian Express that he had to head back to Shimla for official duties and could not agree to a quarantine, so he left. He alleged that the protest against him was politically instigated. Some protesters also raised pro-Congress slogans, he alleged.

Mahila Mandal president Sonam Dolma vehemently denied these allegations. “Some people asked us to give a written apology for raising political slogans… We won’t apologise for something we have not done. It was a non-political, anti-Covid protest,” she said.

Lahaul-Spiti SP Rajesh Dharmani alleged the residents singled out the minister in enforcing the quarantine restriction and blocking his entry, and the state government rules do not require quarantine for intra-state travel, so the case was registered. Spiti has remained Covid-free so far.