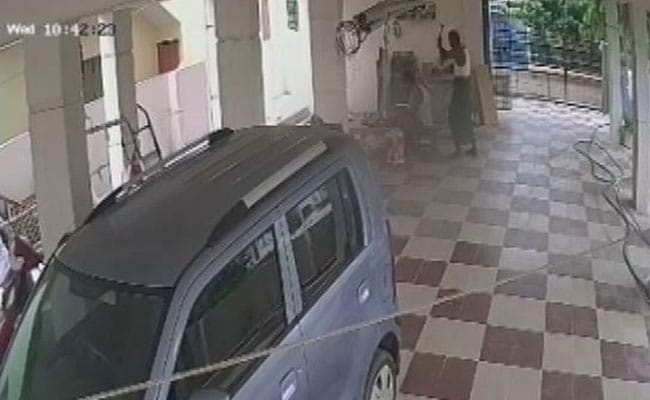 Andhra Pradesh: CCTV footage from the car-parking area of the home shows the murder.

Chilling CCTV footage from a home in the coastal city of Visakhapatnam in Andhra Pradesh has emerged of a man picking up a hammer and almost in a premeditated manner hammering his 40-year-old son to death on Wednesday.

The man, identified as Veera Raju, subsequently surrendered to the police. He murdered his son allegedly over a property dispute.

The visuals from the verandah or the car-parking area of their home shows the father pacing the area as his son is seen sitting on a stool, his back to him. The man then stands behind the son and hits him on his head with a hammer.

The man continues to pace up and down the car-parking area as his son lies bleeding on the floor.

A heated argument is said to have broken out between the man and his son over property.

Both Veera Raju and his son were seamen. The son had returned home about a week ago.

"Veera Raju killed his son Jalaraju after a heated argument took place between them over a property dispute. Veera Raju attacked his son with a hammer and murdered him on the spot," a Visakhapatnam West police officer said.