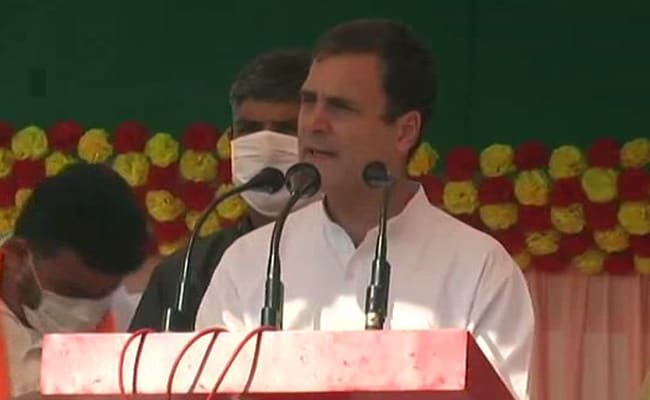 A crowd in Bihar's West Champaran district clapped and whooped today as Congress's Rahul Gandhi bantered with a member of the audience over a jibe at Prime Minister Narendra Modi. "Woh bol raha hai pakora tal (he is saying go fry pakoras (vegetable fritters)," a man in the crowd chimed in as Rahul Gandhi spoke of unemployment and accused the Prime Minister of telling lies.

"Did you fry pakoras? When you come next, you should offer some to Nitish-ji and Modi-ji," Mr Gandhi said to cheers and applause.

"Now, the Prime Minister no longer says in speeches that he'll give jobs to 2 crore young people," Mr Gandhi said before being interrupted. "He knows he was lying and the people also know it. I guarantee, if the Prime Minister comes here and says he'll give 2 crore jobs, the crowd will chase him away," he said.

Both PM Modi and Mr Gandhi criss-crossed the state today as the first phase of elections was in progress. While PM Modi addressed three rallies, finishing with one in state capital Patna, Rahul Gandhi spoke in West Champaran district.

The Congress, which is partnering Lalu Yadav's Rashtriya Janata Dal and the Left parties for this election, is backing Tejashwi Yadav as its Chief Ministerial candidate. The party is contesting 20 seats in this phase of the elections.