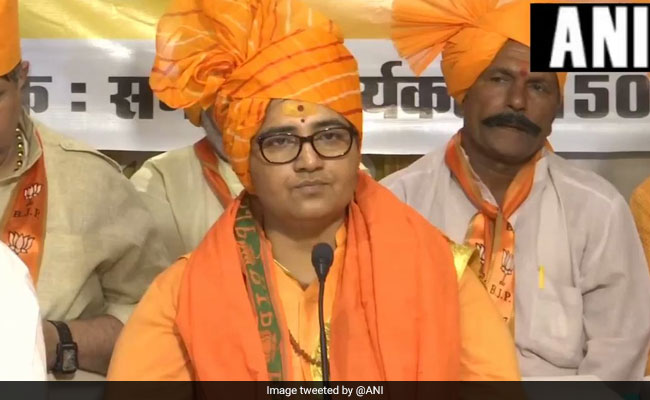 New BJP recruit Sadhvi Pragya Singh Thakur, in shocking comments on Hemant Karkare, has boasted that the 26/11 hero died because she "cursed" him. "I had told him you will be destroyed, and he was gone in less than two months," bragged Sadhvi Pragya, a 2008 Malegaon blasts accused who has been named a BJP candidate for the national election.

Hemant Karkare died fighting terrorists during the 26/11 Mumbai attack, in which 166 people were killed.

As the chief of Maharashtra's Anti-Terrorism Squad, Hemant Karkare had investigated charges against Sadhvi Pragya Singh in the blasts in Malegaon in 2008.

"The investigation team called Hemant Karkare and said if you do not have evidence, let her go. He said, 'I will do anything to get evidence against her. I won't let her go.' This was his hatred (kuteelta). He was anti-national. He was dharm virudh (anti-religion). You won't believe, but I said, 'tera sarvanash hoga (you will be destroyed)'. Just after 'sawa' month, terrorists killed him," said Sadhvi Pragya to reporters on Thursday.

She was flanked by BJP leaders who are seen clapping at the remarks.

Hemant Karkare was the first officer to investigate the blasts on September 29, 2008, in which six people were killed and 101 injured.

Lt Col Shrikant Purohit, Sadhvi Pragya and others were arrested and were charged with plotting the blasts.

Sadhvi Pragya, accused number 1 in the Malegaon case, was given a clean chit by the National Investigation Agency (NIA) in 2015, but the trial court refused to let her off. The NIA had said there was no evidence against her, but the court had said it was difficult to accept since her motorcycle was used in the blast.

The court dropped charges against her under the stringent Maharashtra Control of Organised Crime Act (MCOCA) but is trying her under the Unlawful Activities (Prevention) Act. She was granted bail by the Bombay High Court in 2017.

She joined the BJP this week and was immediately named as the party's candidate from Bhopal for the election.