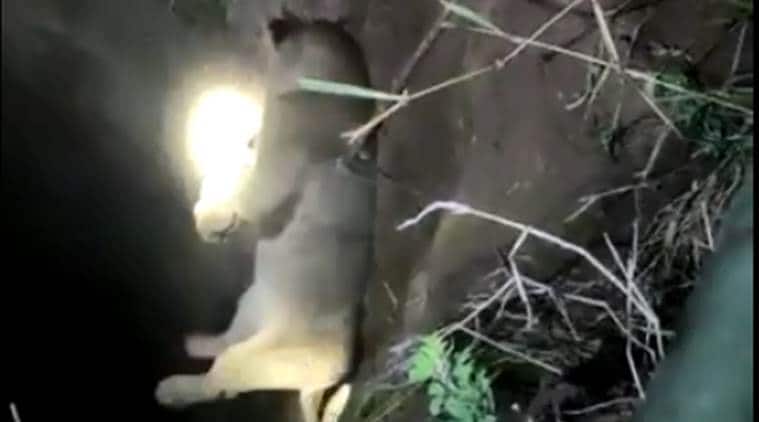 Dilubhai, sarpanch of Manavav village alerted forest department at around 7:30 pm on Saturday that four lions had fallen in an abandoned well on his mango orchard. Soon, Sarasiya range forest officer MR Odedra and other staff members who were out, patrolling the area, reached the spot and initiated an operation to rescue the carnivores.

“Dilubhai was doing his routine inspection at the mango orchard when he spotted a lioness. Around the same time, he also heard the roards of lions from an area of depth and suspected them to be coming from the well. After checking, he soon alerted the forest department,” RFO Odedra said.

Chief conservator of forests of the Junagadh wildlife circle, Dushyant Vasavada said that the four sub-adult lions, aged between two and three years, were rescued early this morning. “It was an open and abandoned well without any water. However, the lions did not suffer any major injuries. Our staff rescued them in short time and gave treatment on the spot and later shifted them to a facility for keeping them under observation,” Vasavada told The Indian Express.

The CCF said that the lions were taken to Jasadhar Rescue Centre, adding that they would be kept under observation for a couple of days. “We shall release them back into the wild once it is confirmed that they are fit,” he further said.

Of the four which had fallen in the well, three were sub-adult lions and one, a lioness.

Manavav village is located on the edge of Ambardi reserve forest in Sarasiya range of Gir forest division. This reserve forest is home to a few dozen Asiatic lions. The Ambardi safari park is also located in the same forest.

Forest officers said that since Asiatic lions belong to the cat family, they can survive such falls without major injuries.

Gir forest and other protected areas spread across Junagadh, Gir Somnath, Amreli and Bhavnagar districts are the last natural habitat in the world for Asiatic lions. As part of their lion conservation efforts, the forest department gives grants to farmers on the periphery of lion habitats to cover their open farm wells so that the big cats do not fall in them accidentally. “However, this well in the mango orchard was not covered as it was not in use and there was little water in it,” the CCF added.