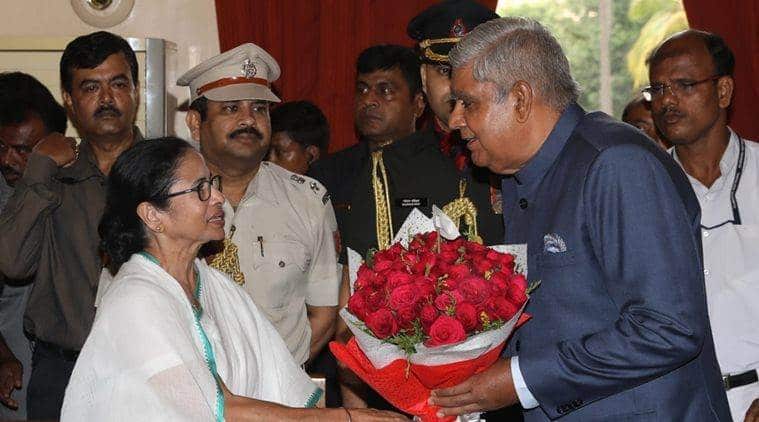 Even as West Bengal Governor Jagdeep Dhankhar and the TMC government engaged in a fresh war of words over his recent visit to Singur, the Governor’s request for a helicopter to visit Murshidabad triggered a sharp reaction from the state government.

Dhankhar had requested the state government for a helicopter on Friday to visit Farakka in Murshidabad district to attend silver jubilee celebrations of SNH College. A press note from Raj Bhavan said a response from the government was awaited. “Keeping in view the delay involved, communication in that matter has already been sent by him to honourable Chief Minister, but a response to that is awaited,” read the statement.

State minister Chandrima Bhattacharya, however, questioned Dhankhar’s request for a helicopter. “First, he must inform the state government about the purpose of his visit and why he needs a helicopter. The CM used a helicopter this week as the situation demanded it. She needed it to monitor areas affected by Cyclone Bulbul. He is going out every day and making political statements. He is doing it intentionally as he wants to stay in politics,” Bhattacharya said.

Governor Jagdeep Dhankhar, who assumed office in July, has been engaged in a war of words with the state government over several issues — from his seating at Durga Puja carnival to comments on his security since he rushed to Jadavpur University when Union minister Babul Supriyo was gheraoed by students. Last month, there seemed to be a brief thaw when CM Mamata Banerjee invited him to her house for Kali Puja.

Dhankhar later said, “I don’t do any politics, whether I visit or not. I will assess the situation, and if my visit is required I will go. I will travel 600 km. I will leave Raj Bhawan at 5 am for the cause of education. It is not easy to travel 600 km in a day by car… It (helicopter) is not available as of now.”

Bhattacharya also brought up the Governor’s surprise visit to Singur BDO office on Monday —Dhankhar could not meet the BDO or his deputy as both were on leave, and had expressed disappointment, saying he wanted to know more about Singur.

“Instead of discharging duties of a Governor, he is working as a political leader here. This is very unfortunate,” she said.

Earlier in the day, Chief Minister Mamata Banerjee, without naming anyone, said “there are some people who are behaving like a BJP mouthpiece and want to run a parallel administration”.

“Some nominated persons… they are behaving too much. They should not even supersede the central government. The Centre must take care of it,” she told mediapersons after a review meeting.

Dhankhar, on his part, asked if the government was trying to conceal something in Singur and Nandigram. “I went to Singur recently and questions are being raised about my visit. I had informed government officials before going there. If there is so much hue and cry about visiting any place in West Bengal, then I feel like spending a lot of time in Singur and Nandigram. As Governor, I should have knowledge about everything going on there. If you are trying to hide something, I will definitely want to see it,” Dhankhar told mediapersons.