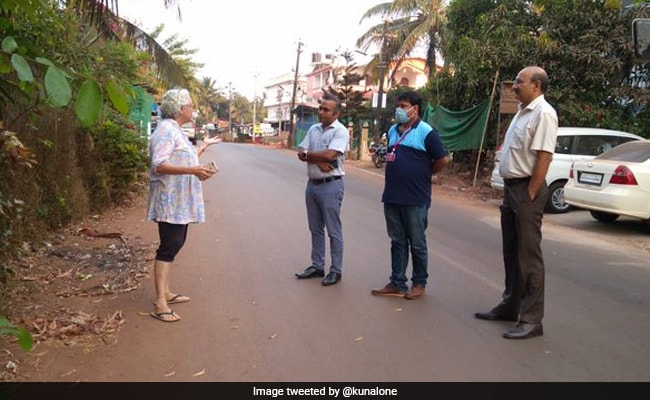 In the picture, the actor can be seen speaking with the officials while maintaining safe social distance.

The Goa government today sent its officials to help actor Nafisa Ali who is stranded in the coastal state since lockdown was announced to contain coronavirus.

Ms Ali, a cancer survivor who is staying at Morjim village in North Goa district, had told PTI earlier in the day that she was running out of her medicines.

After learning about her plight, the Goa Chief Minister's Office sent officials to help her.

"Local incident Commandar has established contact with her and necessary help has been extended," the CMO tweeted.

It also posted a picture of the actor speaking with the officials while maintaining safe social distance.

Earlier during the day, Ali told PTI that she was staying with her daughter in Goa and finding it hard to get her medicines due to the nationwide lockdown.

"The first week was very hard here in Goa (after the lockdown was announced) but now vegetable shops are open. Goa was in a bad situation. Everything was locked down so there was nothing available, no water, vegetables, ration," she said.

"One could not go out to buy anything because the cops would stop you...whoever was trying to go anywhere would get hit," Ms Ali told PTI.

The actor, who lives in Delhi, had come to meet her daughter in Goa for a week.

"Now, my medicines are running out. I have to take some medicines for cancer treatment which are not available anywhere in Goa. They are all lying in Delhi and courier services are closed so they cannot be sent," she said.

"As and when my medicines run out I will stop taking them because they are not available. What to do? I understand the situation is such one can not help," Ms Ali added.